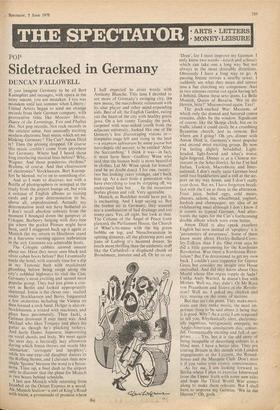 If you imagine Germany to be all Bert Kaempfert and sausages, with opera in the rainy season, you are mistaken. I too was mistaken until last summer when.Liberty/ United Artists began to send me strange records from their German company, with provocative titles like Monster Movie, Dance of the Lemmings, Yeti and Phallus Dei, Not pop records. Not rock records in the strictest sense. Just unusually exciting modern electronic beat music which set me blinking. Germany? The Can? Anion DIM ii? Then the plennig dropped. Of course this music couldn't come from anywhere but Germany. Where had I heard those long interlacing musical lines before? Why, Wagner. And those ponderous rhythms? Brahms, of course. And that chiaroscuro of electronics? Stockhausen. Bert Kaemp- fert be blowed, we're on to something else.

And so I went to discover, not with a flotilla of photographers or notepad at the ready from the airport lounge on, but with a suitcase of English albums as visiting cards and a grim determination to be, above all, unprofessional. Actually my determination need not have bothered as 1 don't recall absolute sobriety from the moment I bounced down the gangway at Cologne, Burberry bulging with duty-free gin where the pocket Pitman might have been, until I staggered back up it again at Munich (let my return to Heathrow stand as a fearsome warning against inebriation in the air). Germans are admirable hosts.

The Cologne cabbies seemed unsure about me. Have they never seen black and silver cuban boots before? But I eventually made the hotel, with scarcely time for a dip m my Teutonic bath with recalcitrant plumbing before being swept along the city's cobbled highways to visit the Can, Germany's most exciting and second most Popular group. They had just given a con- cert in Berlin and looked appropriately shattered. lrmin is the clever one: studied under Stockhausen and Berio, frequented a few orchestras including the Vienna so then formed a rock band. Holger is also ex- Stockhausen, a wizard with machines, and Plays bass passionately. Then Jacki, a German drummer if ever there was. And Michael who likes Torquay and plays his guitar as though he's plucking turkeys. And lastly Damo, Japanese, improvising on vocal chords and body. We meet again the .next day, a hectically lazy, afternoon during which lrmin throws out words like alienation', 'surrogate' and 'apoplexy', while his one-year-old daughter dances to the Rolling Stones, and I christen their new single 'Iguana' because the word is a bossa- nova. Time up, a final dash to the airport only to discover that the plane for Munich is two hours behind schedule.

I last saw Munich while returning from Istanbul on the Orient Express in a mood. Ah, Munich Station—a sort of King's Road with trains, a promenade of promise where

I half expected to cross words with Anthony Blanche. This time 1 decided to see more of Germany's swinging city, the new music, the macrobiotic restaurant with its sitar player and other mind-expanding aids. Best of all, the English Garden, eating out the heart of the city with healthy green jaws. On a hot sunny Tuesday the park, carpeted with near-naked youth from the adjacent university, looked like one of De Quincey's less discouraging visions or- tempietto stage left and rising in the heat —a stuprum sabinarum by some jocose but narcoleptic old master; to be retitled 'After the Succumbing.' 1 think it was—in fact, it must have been--Godfrey Winn who said that the human body is more beautiful in clothes. Let Mr Winn speak for himself (and he no doubt does). I for one, twenty- two but looking years younger, can't back him up. As a dart from a generation who have everything to lose by stripping off, we understand him but . . . In the .meantime bodies glisten and roll. Very agreeable.

Munich, as Baedeker would have put it, is enchanting. And I kept saying so. But the foulest air in Germany, they assured me:a combination of bad drainage and too many cars. Yes, all right, but look at that. The Column of the Angel of Peace (cute glances), the Parliament House, the Church of What's-its-name with the big green bubble on top, and Neuschwanstein in spitting distance, all the glittering pots and pans of Ludwig it's haunted dream. So much more thrilling than the authentic stuff like the Cathedral—a displaced chunk of Broadmoor, inmates and all. Or let us say

.`Dom', for I must improve my German. I only know two words—kitsch and schmalz which can take one a long way but not always in the most desirable directions. Obviously I have a long way to go. A passing breeze revives a nearby sewer. 1 suddenly see what they mean and retreat into a bar clutching my composure. And in two minutes retreat out again having left it behind. Damn these sexy jeans. La Belle Munich, Queen of Bavaria.:Wo ist der Herren, bitte?' Misconstrued again. Taxi !

The pock-marked War Museum, of which only the domed and battered centre remains, slides by the window. Significant of course, like the Skopje clock, but on its traffic island it could easily be a crumbling Byzantine church, just as remote. But where ant I going? Oh yes, dinner with Amon DOW it, Germany's most popular and second most exciting group. By now Pitt feeling slightly befuddled. Light- headed, light-footed and what's worse, light-fingered. Dinner is at a Chinese res- taurant in the Soho district. So far I've had Italian, Turkish, Macrobiotic and Inter- national. I don't really taste German food until two frankfurters and a roll at the air- port on my way home, and I don't really taste those. But no, I have forgotten break- fast with the Can at three in the afternoon. Fruit juice, boiled eggs, cold meats, cheeses, salami, tea, wheatbread, yoghurt, hashish and champagne; my idea of an exhilarating meal although 1 don't know if it counts as typical German. And after- wards the tapes for the Can's forthcoming double album which were even better.

Amon Diiul it also speak excellent English but now instead of 'apoplexy' it is `parameters of awareness'. Some of them know more about Huxley-Ballard-Crow- ley-Tolkien than I do. One even says he did a little gunrunning for the Kurdestan Revolution. Was there a Kurdestan Revo- lution? But I'm determined to get my own back. I couldn't care tuppence for Gunter Grass but consider my insight into Hesse unrivalled. And did they know about Otto Mudd whose film orgies topple de Sade? Unlike Andy Warhol, he doesn't live with Mother. Well no, they didn't. Or Mr Rosa von Pratinheim and Sisters of the Revolu- tion? Well no. 1 poked my chicken and rice. musing on the irony of nations.

But that isn't the point. They make musi- cians and they make music, the most im- portant thing to be said about it being that it is good. Why? As a critic I am supposed to tell you. Rhythmically alert, electronic- ally ingenious, vertiginously energetic, no Anglo-American simulacrum this; colour- ful, Germanically exciting and full of sur- prises . . . Yes, but it is the old story of being incapable of describing. colours to a blind man. I have a better idea. They are touring Britain in this month with London engagements at the Lyceum, the Round- house and the Marquee Club. Don't miss it ‘if you value your cosmic consciousness. As for me, I am looking forward to Berlin where I plan to exorcise Isherwood from the Upper Sixth with some new tales and hope the Third World War comes along to make them relevant. But I shall have to improve my German. 'No ist der Herren?' Oh, gosh.