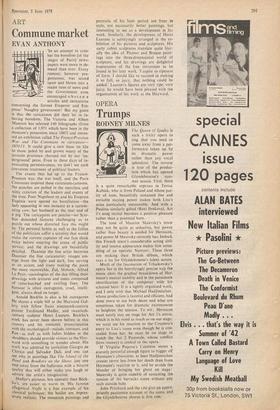 The tone of Maurice Maievsky's tenor may not be quite as seductive, but power rather than beauty is needed for Hermann, and power M Maievsky certainly has. Indeed, this French tenor's considerable acting abil- ity and intense appearance makes him some- thing of an operatic Nureyev. These three are making their British debuts, which says a lot for Glyndebourne's talent scouts.

Much of the fascination of Tchaikovsky's opera lies in the horrifyingly precise way the music plots the gradual breakdown of Her- mann's mental stability and in the passionate identification of the composer with his schizoid hero. It is a tightly organised work, and I only wish that Michael Hadjimischev, whose production is tasteful and efficient, had done more to use both decor and what are sometimes taken for dramatic excrescences to heighten the tension. To wit : Hermann must surely stay on stage for Act l's storm, which is in his mind as much as on our stage; we must see his reaction to the Countess's entry to Lisa's room even though he is con- cealed from her; he must be on stage to watch the Act 2 Pastorale, whose conflict (love/money) is central to the opera. If Virginia Popova's Countess seems a scarcely powerful enough figure to trigger off Hermann's obsessions, at least Hadjimischev creates terror less from her death than from Hermann's reaction to it, and he avoids the blunder of bringing her ghost on stage:' Maievsky is quite capable of sustaining the tension of the barracks scene without any such outside help.

John Pritchard and the LPO give an appro- priately passionate account of the score, and the Glyndebourne chorus is first rate.