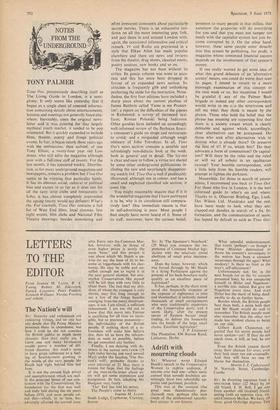 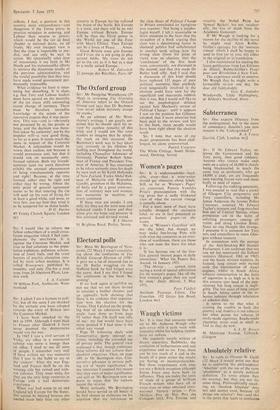 Sir: In diverting sequence from a SPECTATOR letter (22 May)

by an old friend, J. H. Bell, I get one from another old (mutual) friend, setting forth an opposite view, viz. anti-Common Market. We have. all three, good Oxbridge degrees. This reflects, I feel, a position in this country most extraordinary—and dangerous if the Tories prove in practice mistaken in entering, and Labour then returns to power; which would be the (or a) final chapter in national decay, on all fronts. My own inexpert view is that the issue is impossible to pre- dict, and can only be seen in action. My (practically sole) item of reassurance is my faith in Mr Heath and his statesmanlike efforts to retrieve the disastrous results of the previous administration, and the woeful possibility that they may have made sound government per- manently impossible. What evidence we have is inter- esting but disturbing. It is clear, e.g. that Tory and Labour leaders must have agreed on the necessity of the (to many still) astounding recent change of currency. There must be therefore recondite knowledge in the minds of the operative experts that it was neces- sary. This was—and is—obviously not possessed by us, the people at large, and the decision was there- fore taken 'by authority', not by the popular will—a very good thing, so far as it goes. It seems much the same in respect of the Common Market. A referendum would be worse than useless; not because it would pronounce anti, but that it would rest on necessarily unin- formed opinion. Both my friends' opinions (and my own) therefore exhibit the unusual phenomenon of being simultaneously opposite and right! Because, at the time formed, either may be right and either may be wrong. About the only point of general agreement seems to be that entering the CM vv ill send up the cost of living for at least a good while, and none, or very few, can see how that wind is to be tempered for us shorn lambs.