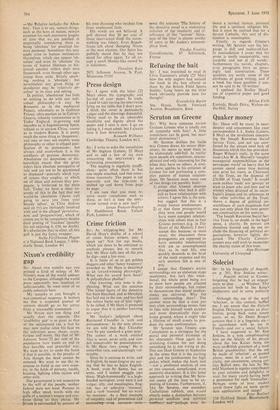 Sir: About two months ago you printed a kind of eulogy of Mr Nixon's state of the world address to the Congress. although the world press apparently was sceptical or unfavourable. So were most of us ruddy colonials here. My remarks to you brought a non-committal response. It bothers me that a respected journal of opinion should go so far astray from a reasonable assessment.

Mr Nixon says one thing and usually does the opposite. His 'credibility gap' is as great as that of the unlamented LIM a fact he may now realise since his face on the television news shows strain. fatigue and worry. like that of Mr Johnson, Some 73 per cent of the population here wants an end to that horrible and genocidal war. We want to try to undo the harm if that is possible, to the peoples of Asia though the dead cannot be restored. We want to use the re- sources to build in our own coun- try, in the fields of poverty, health, housing. fighting white racism and other evils.

Our government is not responsive to the will of the people, neither federal state nor local. Persons in high office speak words with the guile of a serpent's tongue and con- tinue doing as they please. Mr Nixon is-surrounded by persons of

his own choosing who insulate him from unpleasant facts.

His words are not believed. A poll showed that 20 per cent of those interviewed think the moon- walking was fakery. Even Repub- licans talk about 'dumping' Nixon at the next election. Our Spiro has publicly stated that he may not stand for office again. To all ex- cept a small Mosley-like crowd he is ridiculous.