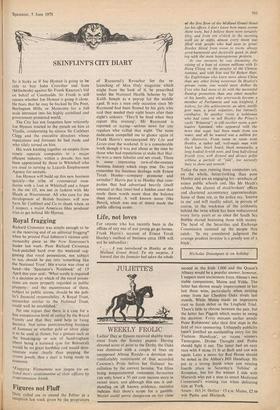 So it looks as if Joe Hyman is going to be able to buy John Crowther and Sons (Milnsbride) against Sir Frank Kearton's bid on behalf of Courtaulds. Sir Frank is still unsure whether Joe Hyman is going it alone. He fears that he may be backed by Du Pont, Burlington Mills, or Monsanto for a full scale intrusion into his highly cartelised and government-protected world.

The City has not forgotten how reticently Joe Hyman reacted to the putsch on him at Viyella, condemning by silence Sir Cuthbert Clegg and the executive directors whose reputations and fortunes he had made and who vilely turned on him.

His work knitting together an empire from ninety separate companies to a major efficient industry, within a decade, has not been appreciated by those in Whitehall who are used to turning to Lazards Employment Agency for recruits.

Joe Hyman will build up this new business quickly—the tribe of commercial man- darins with a foot in Whitehall and a finger in the JRC till, are not in fashion with Mr Heath at Westminster. All who care for the development of British business will now have Sir Cuthbert and Co to thank when, as I suspect, a major American fibre producer tries to get behind Mr Hyman.