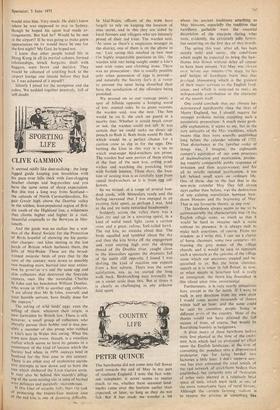 It seemed oddly like deer-stalking: the long- legged guide keeping you breathless with his pace over hills thick with foot-clogging heather clumps and bog-patches and you have the same sense of sharp expectation. But this was a long way from Scotland— the uplands of North Carmarthenshire. Es- gair Gwair high above the Docthie valley in the wildest, least-populated region of Brit- ain south of the Highland line, a wilderness that climbs higher and higher in a vast, beautiful emptiness to the Berwyns in Mer- ioneth.

And the guide was no stalker but a war- den of the Royal Society for the Protection of Birds hopeful of showing me his partic- ular charges: red kites nesting in the last patch of Britain which harbours them, the hills of Mid-Wales These are the broad- winged majestic birds of prey that by the turn of the century were down to possibly wo breeding pairs, harried into near extinc- tion by ga mei:cc -e-s and the same egg and skin collectors that destroyed the Speyside ospreys, men like the naturalist Charles St John and his henchman William Dunbar. who wrote in 1850 to another egg collector. 'I am afraid that Mr St John. yourself. and Your humble servant, have finally done for the ospreys.'

The taking of wild birds' eggs. even the selling of them, whatever their origin. is now forbidden by British law. There is still. however, a small group of collectors who Ille,yally pursue their hobby and it was pos- sibly a member of this group who robbed a kite's nest in Wales this snring. What the aspn now fears more. though, is a mindless malice which seems to have its genesis in a resentment of the kind of 'success which the Society had when. in 1959. ospreys bred in Scotland for the first time in this century. There is .no other way of explaining succes- sive attempts to saw down and to burn the tree which sheltered the Loch Garten eyrie. It may also be behind this month's pillag- ing of the same nesting site in smite of barbed wire defences and parabolic microphones. If this kind of security fail,. then t'ie task of protecting the twenty-four nesting sites of the red kite is one of daunting difficulty. In Mid-Wales, officers of the RSPB have largely to rely on keeping the location of sites secret, and in this they are aided by local farmers and villagers who are intensely proud of their red kites. The warden said, 'As soon as there's a suspicious stranger in the district, one of them is on the phone to me.' Last spring, this resulted in two men ('in highly respectable positions in life.' the warden told me) being caught under a kite's nest with ropes and climbing irons. There was no prosecution : this is usually possible only when possession of eggs is proved— and naturally the Society fee's it is hciter to prevent the nests being disturbed than have the satisfaction of the offenders being punished.

We pressed on to our vantage point. a spur of hillside opposite a hanging wood of low, stunted oaks. In its green recesses, the warden said, was the nest. The hen would be on it, the cock on guard in a nearby tree. Whether it would break cover or not, the warden could not tell. It was certain that we could make no direct ap- proach to flush it. Both birds would fly then, which would be a perfect chance for a carrion crow to slip in for the eggs. Dis- turbing the kites in this way is a sin to which over-eager bird-watchers are prone. The warden had seen parties of them sitting at the foot of the nest tice. eating %old- wiches and watching the panicking birds with foolish interest. These days. the loca- tion of nesting sites is as carefully kept from casual birdwatchers as it is from egg col- lectors.

So we waited. at a range of several hun- dred yards, with binoculars ready and the feeling increased that 1 was engaged in an exciting field sport, as perhaps 1 was. And in the end we were rewarded handsomely.

Suddenly across the valley , there was a faint cry and up in a towering spiral, in a kind of weird mock fight. came a carrion crow and a great. rufous, fork-tailed hawk. The red kite, no mistake about that. The birds squalled and tumbled about the sky and then the kite broke off the engagement and went soaring high over the shining thread .of the Doethie river. caught clean in the binoculars against the dramatic fall of the sunlit cliff opposite. I found I was shaking, the kind of reaction one expects from a first salmon. There was the same satisfaction, too, as we started the long walk back. Birdwatching may normally he on a cosier scale than this. But at times it is clearly as challenging as any arduous field sport.