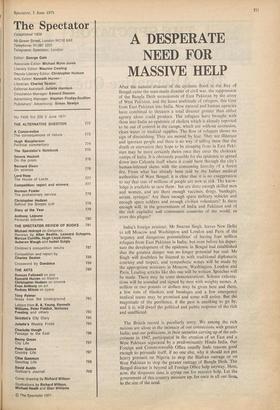 A DESPERATE NEED FOR MASSIVE HELP

After the natural disaster of the cyclonic flood in the Bay of Bengal came the man-made disaster of civil war, the suppression of the Bangla Desh secessionists of East Pakistan by the army of West Pakistan, and the latest multitude of refugees, this time from East Pakistan into India. Now natural and human agencies have combined to threaten a total disaster greater than either agency alone could produce. The refugees have brought with them into India an epidemic of cholera which is already reported to be out of control in the camps, which are without sanitation, clean water or medical supplies. The flow of refugees shows no sign of diminishing. They arc moved by fear. They are illiterate and ignorant people and there is no way of telling them that the death or starvation they hope to be escaping front in East Paki- stan may be more certainly theirs once they enter the choleraic camps of India. It is obviously possible for the epidemic to spread down into Calcutta itself where it could burn through the city's human-infested slums with the consuming ferocity of a forest fire. From what has already been said by the Indian medical authorities of West Bengal, it is clear that it is no exaggeration to say that tens of millions of people are now at risk. The know- ledge is available to save them: but are there enough skilled men and women, and are there enough vaccines, drugs. bandages, serum, syringes? Are there enough spare military vehicles and enough spare soldiers and enough civilian volunteers? Is there enough will, in the governments of India and Pakistan and of the rich capitalist and communist countries of the world, to avert this plague?

India's foreign minister, Mr Swaran Singh, leaves New Delhi to tell Moscow and Washington and London and Paris of the `urgency and dangerous potentialities' of having four million refugees from East Pakistan in India; but even before his depar- ture the development of the epidemic in Bengal had established that the greatest danger was no longer potential but real. Mr Singh will doubtless be listened to with traditional diplomatic courtesy and respect, and sympathetic noises will be made by the appropriate ministers in Moscow, Washington, London and Paris. Leading articles like this one will be written. Speeches will be made. There may be some demonstrations. Solemn exhorta- tions will be sounded and signed by men with weighty names. A million or two pounds or dollars may be given here and there, a few tons of blankets and bandages and a few emergency medical teams may be promised and some will arrive. But the magnitude of the pestilence, if the pa.t is anything to go by. and it is, will dwarf the political and public response of the rich and unafflicted.

The British record is peculiarly sorry. We among the rich nations are alone in the intimacy of our connections with greater 796 India; and our politicians, in their sectarian carving up of the sub- cotinent in 1947, participated in the creation of an East and a 797 West Pakistan separated by a predominantly Hindu India. Our Foreign and Commonwealth Office usually finds reasons good 797 enough to persuade itself, if no one else, why it should not put heavy pressure on Nigeria to stop the Biafran outrage or on 798 West Pakistan to stop the greater outrage of Bangla Desh. The 798 Bengal disaster is beyond all Foreign Office help anyway. Here, now, the desperate time is crying out for massive help. Let the government of this country measure up. for once in all our lives, to the size of the need.