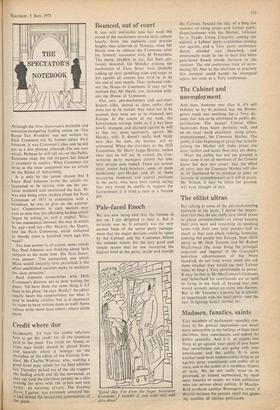 Although the New Statesman's excitable and sensation-mongering leading article on `The Royal Tax Avoiders' was not written by Dick Crossman but by former editor Paul Johnson, it was Crossman's idea and he did put in a few phrases although I'm not sure which. Perhaps he will tell us—or the Public Relations chap the old staggers has found it necessary to employ. What Crossman did write in the issue concerned was an article on the Ethics of Advertising.

It is only by the purest chance that I know Paul Johnson wrote the article—he happened to he staying with me the pre- vious weekend and mentioned the fact. He was also doing some reading about the Paris Commune of 1871 in connection with a broadcast he was to give on the anniver- sary. Connoisseurs in such matters may care to note that the offending leading article began by asking (as well it might), `What is the connection between the way in which we pay—and tax—Her Majesty the Queen, and the Paris Commune, which collapsed in bloody ruins a hundred years ago this week?'

The true answer is, of course, none, except that Paul Johnson was thinking about both subjects at the same time. His New States- man answer: `The connection, one which Marx would instantly have perceived, is the effort established societies make to maintain the class structure.'

Paul Johnson sympathises with Dick Crossman's decision not to deny writing the piece: `I'd have done the same thing if I'd been in his place.' he says. Really? An editor clearly bears the responsibility for what is said in leading articles; but is it necessary to claim to have written them as well? Some editors write more than others; others claim more,