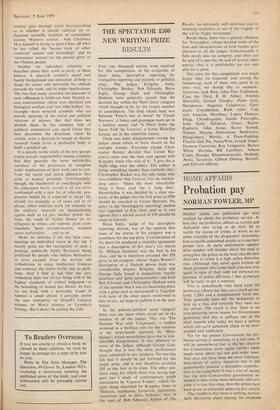 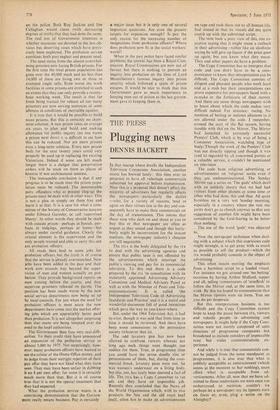 Neither public nor politicians get very worked up about the probation service. At best they see probation officers as worthy and dedicated men trying to do their bit to tackle the causes of crime; at worst as an- other example of the do-gooders' determina- tion to enable undoubted crooks to avoid their proper fate. At party conferences speaker after speaker will thunder about the need to strengthen the police on the basis that the best deterrent to crime is a high police detection rate. (Although they never quite explain all those prisoners who come back time and time again in spite of their only too personal ex- perience of police efficiency.) But probation will he lucky to get a mention.

This is undoubtedly very hard upon the probation officers but they are a small service (only 3.200) and a conspicuously loyal one. They generally have not the inclination to kick up a fuss and certainly they have not the power. The result is that there is no over-powering union reason for Government generosity and that is perhaps one of the chief reasons why today we have a service which can quite genuinely claim to be over- worked and underpaid.

Yet for the present Government the pro- bation service is something of a test case. It will be remembered that at the last election the Conservative party (quite rightly) made much noise about the law and order issue. This may not have been the most felicitous description of policy intention but it did undoubtedly promise a distinctive contribu- tion in the crime field. It was a way of saying that the next Conservative government in- tended to take crime more seriously and cert- ainly it is true that since then the police have been given an extremely generous pay award.

The trouble is that there is nothing particu- larly distinctive about placing the emphasis on the police. Both Roy Jenkins and Jim Callaghan would claim (with decreasing degrees of truth) that they had done the same. The real test of Government intention is whether resources are devoted to the less ob- vious but deserving cases which have previ- ously been neglected. The probation service combines both past neglect and present need.

The need stems from the almost overwhel- ming pressure now facing British prisons. For the first time the total prison population has gone over the 40,000 mark and no less than 14,000 of these are living two or three to cramped single cells, Even worse the work facilities in some prisons are stretched to such an extent that they can only provide a twenty- hour working week. The result is that far from being trained for release all too many prisoners are now serving sentences of semi- idleness in conditions of inevitable squalor.

It is true that it would be possible to build more prisons. But this is certainly no short- term solution. A new prison takes on average six years to plan and build and making allowance for public inquiry (no one wants a prison next door) it is difficult to see how this can be reduced. Nor are more prisons even a long-term solution. Every new prison built for the next twenty years could very properly be used up in replacing the existing Victoriana. Indeed if some are left much longer there is a danger that preservation orders will be stuck on them as places of historic if not architectural interest.

The inescapable conclusion is that if any progress is to be made then the prison popu- lation must be reduced. The innumerable petty offenders who at present clog-up the prisons must be dealt with in other ways. This is not a plea to simply set them free and leave it at that. It is a case for what a com- mittee of the Society of. Conservative lawyers under Edward Garnder, QC call 'supervised liberty'. In other words they should be dealt with outside prison- -perhaps in hostels, per- haps in lodgings, perhaps at. home—but always under careful guidance. Clearly the crucial element is the supervision and the only people trained and able to carry this out are probation officers.

All roads then lead to more jobs for probation officers but the truth is of course that the service is already overstretched. New jobs have been added in the past and their work now extends way beyond the super- vision of men and women actually on pro- bation. They provide background reports on men coming before the courts; and they supervise prisoners released on parole. The position has been made worse by the new social service departments now being set up by local councils. For just when the need for probation officers is most acute the new departments have come into the market offer- ing jobs which are appreciably better paid than probation. It is not altogether surprising then that many are being tempted over the road to the locr•l authorities.

The Government then face very real diffi- culties. To their credit they have announced an expansion of the probation service to almost 5,000 by 1975, Not surprisingly, how- ever, many probation officers have wanted to see the colour of the Home Office money, and to judge from their outright rejection of their pay offer they have not liked what they have seen. They may have been unfair in dubbing it an 8 per cent offer; for some it is certainly much more than that. But it is of course true that it is not the special treatment that they had expected.

What the probation service wants is a convincing demonstration that the Govern- ment really means business. Pay is certainly a major issue but it is only one of several important questions. Are even the present targets for expansion enough? Is pay the only reason for the increasing number of resignations from probation officers? Where does probation now fit in the social workers' world?

When in the past police have faced similar problems the answer has been a Royal Com- mission. Royal Commissions are now out of favour but there is nothing to prevent an inquiry into probation on the lines of Lord Mountbatten's famous inquiry into prison security which followed a spate of prison escapes, It would be nice to think that this Government gave as much importance to keeping men out of prison as the last govern- ment gave to keeping them in.