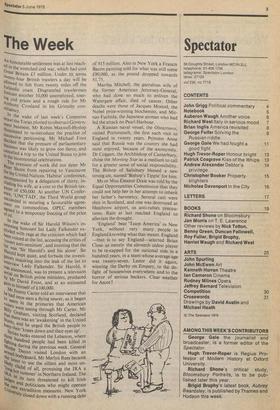 An honourable settlement was at last reached in the wretched cod war, which had cost Great Britain £3 million. Under its terms tw, entY-four British trawlers a day will be ailowed to fish from twenty miles off the Icelandic coast. Disgruntled trawlermen forecast another 10,000 unemployed, soaring cod prices and a rough ride for Mr Anthony Crosland in his Grimsby constituency.

• threatened to re-introduce the practice of successive petitioning. Mr Michael Foot eeided that the pressure of parliamentary nosiness was likely to grow too fierce, and cancelled a trip to the United States to join In the bicentennial celebrations. F. The pressure of work did not deter Mr 'Or the Shore from repairing to Vancouver the United Nations 'Habitat' conference, ,.",ec°rnOanied by a delegation of thirty, in

stleeeeded in securing a favourable agreea'"ent on commodities. OPEC members greed to a temporary freezing of the price °foil.

,,,, ex h:ued with rage at the criticism which had

7e° voiced at the list, accusing the critics of risvert anti-semitism', and insisting that the jit Was 'Sir Harold's and his alone'. Sir

jottnrs inquiring into the leak of the list to w`erview Lady Falkender. Sir Harold, it seasp; ,r1nounced, was to present a television 't on British prime ministers, produced 64 Mn David Frost, and at an estimated t0 himself of £100,000. 4

had Carter told an interviewer that to au once seen a flying saucer, as it began votAseein in the primaries that American sill`js were seeing through Mr Carter. Mr thai' Graham, visiting Scotland, declared St.. there was an 'awakening' in the United kee'es, and he urged the British people to ?their 'knees down and their eyes up'. thr Yrian tanks entered the Lebanon, where ngiZ hundred people had been killed in tv_u log during the previous week. General a'rshe • -•aYan visited London with an he uodYguard. Mr Merlyn Rees became ljkClte5t to use the silliest and most un InocYkelkhe of all, promising the IRA a summer' in Northern Ireland. The judo in its turn threatened to kill Irish thj.es and politicians who might operate tjo;"ew extradition measures. New York IversitY closed down with a running debt

Martha Mitchell, the garrulous wife of the former American Attorney-General,

who had done so much to enliven the Watergate affair, died of cancer. Other deaths were those of Jacques Monod, the Nobel prize-winning biochemist, and Mitsuo Fuchida, the Japanese airman who had led the attack on Pearl Harbour.

A Russian naval vessel, the Obraztsovy, visited Portsmouth, the first such visit to

England in twenty years. Princess Anne said that Russia was the country she had most enjoyed, because of the anonymity.

Dr Coggan, the Archbishop of Canterbury,

chose the Morning Star as a medium to call for a greater sense of social responsibility.

The Bishop of Salisbury blessed a new strong ale, named 'Bishop's Tipple' for him. Ms or Miss Eleanor Dixie was told by the Equal Opportunities Commission that they could not help her in her attempt to inherit her father's baronetcy. Several cats were shot in Scotland, and one was destroyed at Heathrow airport, as anti-rabies precautions. .Rain at last reached England to alleviate the drought.

'England' beat 'Teatn America' in New York, without very many , people in England.knowing what that meant. England —that is to say England—selected Brian Close as merely the eleventh oldest player to be re-capped for the national side in a hundred years, in a team whose average age was twenty-seven. Lester did it again, winning the Derby on Empery, to the delight of housewives everywhere and to the horror of serious backers. Clear weather for Ascot?