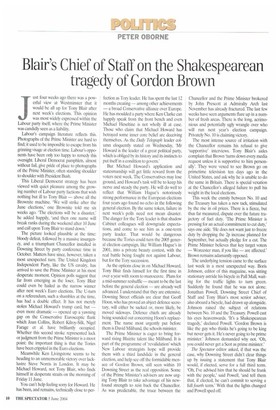 Blair's Chief of Staff on the Shakespearean tragedy of Gordon Brown

Just four weeks ago there was a powerful view at Westminster that it would be all up for Tony Blair after next week's elections. This opinion was most widely expressed within the Labour party itself, where the Prime Minister was candidly seen as a liability.

Labour's campaign literature reflects this. Photographs of the Prime Minister are hard to find; it used to be impossible to escape from his grinning visage at election time. Labour's opponents have been only too happy to remedy this oversight. Liberal Democrat pamphlets, almost without fail, give pride of place to photographs of the Prime Minister, often standing shoulder to shoulder with President Bush.

This Liberal Democrat strategy has been viewed with quiet pleasure among the growing number of labour party factions that wish nothing but ill to Tony Blair — above all the Brownite machine. 'We will strike after the June elections,' one Brownite told me six weeks ago. 'The elections will be a disaster,' he added happily, 'and then one name will break ranks during the weekend after 10 June and call upon Tony Blair to stand down.'

The picture looked plausible at the time: bloody defeat, followed by a massive insurgency, and a triumphant Chancellor installed in Downing Street by party conference time in October. Matters have since, however, taken a most unexpected turn. The United Kingdom Independent Party, like the US cavalry, has arrived to save the Prime Minister at his most desperate moment. Opinion polls suggest that far from emerging as the loser, Tony Blair could even be hailed as the narrow winner after next week's Euro elections. The U-turn on a referendum, such a shambles at the time, has had a double effect. It has not merely stolen Michael Howard's trump card, but — even more dramatic — opened up a yawning gap on the Conservative Eurosceptic flank which Joan Collins, Robert Kilroy-Silk, Nigel Farage et al. have brilliantly occupied. Whether this second stroke represented luck or judgment from the Prime Minister is a moot point: the important thing is that the Tories have been crippled in the Euro elections.

Meanwhile Ken Livingstone seems to be heading to an unmemorable victory over lacklustre Steve Norris in London. It may be Michael Howard, not Tony Blair, who finds himself in desperate straits on the morning of Friday 11 June.

You can't help feeling sorry for Howard. He has been, and remains, technically close to per fection as Tory leader. He has spent the last 12 months creating — among other achievements — a broad Conservative alliance over Europe. He has moulded a party where Ken Clarke can happily speak from the front bench and even Michael Heseltine is not wholly ill at ease. Those who claim that Michael Howard has betrayed some inner core belief are deceiving themselves. As the Daily Telegraph leader column eloquently stated on Wednesday, 'Mr Howard is the leader of a great political party, which is obliged by its history and its instincts to put itself in a condition to govern.'

But Michael Howard's application and statesmanship will get little reward from the voters next week. The Conservatives may lose ground, and Howard's task will be to keep his nerve and steady the party. He will do well to reflect that William Hague's notoriously strong performance in the European elections four years ago found no echo in the following general election. By the same token, failure in next week's polls need not mean disaster. The danger for the Tory leader is that shadow Cabinet colleagues will downgrade expectations, and come to see him as a one-term party leader. That would be dangerous because the Tories could turn the 2005 general election campaign, like William Hague's in 2001, into a private beauty contest, with the real battle being fought not against labour, but for the Tory succession.

As the options close in on Michael Howard, Tony Blair finds himself for the first time in over a year with room to manoeuvre. Plans for a mid-summer reshuffle — meant to be the last before the general election — are already well advanced. I understand that they are extensive. Downing Street officials are clear that Geoff Hoon, who has proved an abject defence secretary, will either be sacked or, more likely, be moved sideways. Defence chiefs are already being sounded out concerning Hoon's replacement. The name most urgently put before them is David Miliband, the schools minister.

The Prime Minister is eager to bring forward rising Blairite talent like Miliband. It is part of the programme of 'revalidation' which New Labour strategists hope will provide them with a third landslide in the general election, and help see off the formidable menace of Gordon Brown, still seen within 10 Downing Street as the real opposition. Some of the Prime Minister's advisers are now urging Tony Blair to take advantage of his newfound strength to rein back the Chancellor. As was predictable, the truce between the Chancellor and the Prime Minister brokered by John Prescott at Admiralty Arch last November has already fractured. The last few weeks have seen arguments flare up in a number of fresh areas. There is the long, acrimonious and potentially ugly wrangle over who will run next year's election campaign. Privately No. 10 is claiming victory.

The most intense source of irritation with the Chancellor remains his refusal to give 'supportive' interviews. Tony Blair's aides complain that Brown 'turns down every media request unless it is supportive to him personally'. They were vexed to see Brown go on primetime television ten days ago in the United States, and ask why he is unable to do the same in Britain. There is special vexation at the Chancellor's alleged failure to pull his weight in the local elections.

This week the enmity between No. 10 and the Treasury has taken a new tack, stimulated by the rise in oil prices. There is a fierce, but thus far measured, dispute over the future trajectoty of fuel duty. 'The Prime Minister is pressing for an actual commitment to cut duty,' says one aide. 'He does not want just to freeze duty by dropping the 2p increase planned for September, but actually pledge for a cut The Prime Minister believes that key target voters — Worcester man, if you like — are affected.' Brown remains adamantly opposed.

The underlying tension came to the surface last week in a most unexpected way. Boris Johnson, editor of this magazine, was sitting stationary astride his bicycle in Pall Mall, waiting for the traffic lights to turn green. Suddenly he found that he was not alone. Jonathan Powell, Downing Street Chief of Staff and Tony Blair's most senior adviser, also aboard a bicycle, had drawn up alongside. Johnson raised the subject of relations between No. 10 and the Treasury. Powell cast his eyes heavenwards. 'It's a Shakespearean tragedy,' declared Powell. 'Gordon Brown is like the guy who thinks he's going to be king but never gets it. He's never going to be prime minister.' Johnson demanded why not. 'Oh, you could never get a Scot as prime minister.'

The Spectator editor asked, if that was the case, why Downing Street didn't clear things up by issuing a statement that Tony Blair would, if elected, serve for a full third term. 'Oh, I've advised him that he should be frank with the people,' said Powell, 'and tell them that, if elected, he can't commit to serving a full fourth term.' With that the lights changed and Powell sped off.