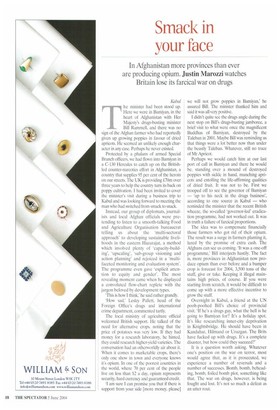 your face In Afghanistan more provinces than ever are producing opium. Justin Marozzi watches Britain lose its farcical war on drugs

The minister had been stood up. Here we were in Bamiyan, in the heart of Afghanistan with Her Majesty's drugs-busting minister Bill Rammell, and there was no sign of the Afghan farmer who had reportedly given up growing poppies in favour of dried apricots. He seemed an unlikely enough character in any case. Perhaps he never existed.

Protected by a phalanx of armed Special Branch officers, we had flown into Bamiyan in a C-130 Hercules to catch up on the Britishled counter-narcotics effort in Afghanistan, a country that supplies 95 per cent of the heroin on our streets. The UK is providing £70m over three years to help the countty turn its back on poppy cultivation. I had been invited to cover the minister's visit during a business trip to Kabul and was looking forward to meeting the man who had switched from smack to snack.

Instead, our group of diplomats, journalists and local Afghan officials were pretending to listen to a smooth-talking Food and Agriculture Organisation bureaucrat telling us about the 'multi-sectoral approach' to developing sustainable livelihoods in the eastern Hazarajat, a method which involved plenty of 'capacity-building', 'upscaling', 'sub-group visioning and action planning' and rejoiced in a 'multifaceted monitoring and evaluation system'. The programme even gave 'explicit attention to equity and gender'. The most revealing moment came when he displayed a convoluted flow-chart replete with the jargon beloved by development types.

'This is howl think,' he said rather grandly,

The local ministry of agriculture official welcomed British support. He talked of the need for alternative crops, noting that the price of potatoes was very low. If they had money for a research laboratory, he hinted, they could research higher-yield varieties. The conversation had an otherworldly air about it. When it comes to marketable crops, there's only one show in town and everyone knows it's opium. In one of the poorest countries in the world, where 70 per cent of the people live on less than S2 a day, opium represents security, hard currency and guaranteed credit.

'I am sure I can promise you that if there is support from your side [more money, please]

we will not grow poppies in Bamiyan,' he assured Bill. The minister thanked him and said it was all very positive.

I didn't quite see the drugs angle during the next stop on Bill's drugs-busting jamboree, a brief visit to what were once the magnificent Buddhas of Bamiyan, destroyed by the Taleban in 2001. Maybe Bill was reminding us that things were a lot better now than under the beastly Taleban. Whatever, still no trace of Mr Apricot.

Perhaps we would catch him at our last port of call in Bamiyan and there he would be, standing over a mound of destroyed poppies with sickle in hand, munching apricots and extolling the life-affirming qualities of dried fruit. It was not to be. First we trooped off to see the governor of Bamiyan — 'up to his neck in the drugs business', according to one source in Kabul — who reminded the minister that the recent British wheeze, the so-called 'governor-led' eradication programme, had not worked out. It was in truth a failure of farcical proportions.

The idea was to compensate financially those farmers who got rid of their opium. The result was a surge in farmers planting it, lured by the promise of extra cash. The Afghans can see us coming. 'It was a one-off programme,' Bill interjects hastily. The fact is, more provinces in Afghanistan now produce opium than ever before and a bumper crop is forecast for 2004, 3,500 tons of the stuff, give or take. Keeping it illegal maintains high prices, of course. If you were starting from scratch, it would be difficult to come up with a more effective incentive to grow the stuff.

Overnight in Kabul, a friend at the UN pooh-poohed Bill's choice of provincial visit. 'If he's a drugs guy, what the hell is he going to Bamiyan for? It's a holiday spot. It's like researching inner-city deprivation in Knightsbridge. He should have been in Kandahar, Hilmand or Uruzgan. The Brits have fucked up with drugs. It's a complete disaster, but how could they succeed?'

It is a question worth asking. Whatever one's position on the war on terror, most would agree that, as it is prosecuted, we experience a number of reversals and a number of successes. Bomb, bomb, beheading, bomb, foiled bomb plot, something like that. The war on drugs, however, is being fought and lost. It's not so much a defeat as an utter rout.