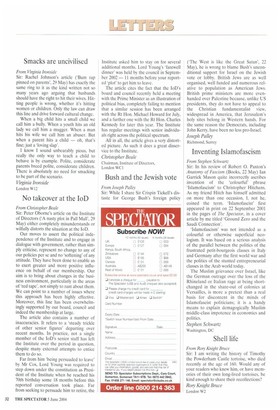 From Stephen Schwartz Sir: In his review of Robert 0. Paxton's Anatomy of Fascism (Books, 22 May) Ian Garrick Mason quite incorrectly ascribes invention of the 'colourful' phrase Islamofascism' to Christopher Hitchens. As my friend Hitch has himself admitted on more than one occasion, I, not he, coined the term. Islamofascise first appeared in print on 22 September 2001 in the pages of The Spectator, in a cover article by me titled 'Ground Zero and the Saudi Connection'.

Islamofascism' was not intended as a colourful or otherwise superficial neologism. It was based on a serious analysis of the parallel between the politics of the frustrated petit-bourgeois classes in Italy and Germany after the first world war and the politics of the stunted entrepreneurial classes in the Arab world today.

The Muslim grievance over Israel, like the German outrage over the loss of the Rhineland or Italian rage at being shortchanged in the share-out of colonies at Versailles, is more a pretext than a real basis for discontent in the minds of Islamofascist politicians; it is a handy means to explain demagogically Muslim middle-class impotence in economics and politics.