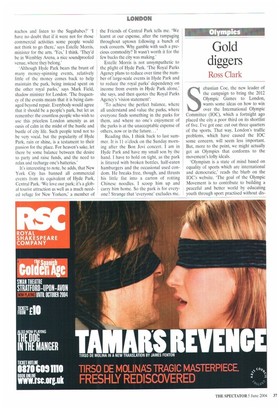 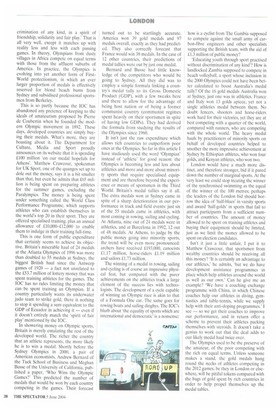 Sebastian Coe, the new leader of the campaign to bring the 2012 Olympic Games to London, wants some ideas on how to win over the International Olympic Committee (IOC), which a fortnight ago placed the city a poor third on its shortlist of five. I've got one: cut out three quarters of the sports. That way, London's traffic problems, which have caused the IOC some concern, will seem less important. But, more to the point, we might actually get an Olympics that conforms to the movement's lofty ideals.

`Olympism is a state of mind based on equality of sports which are international and democratic,' reads the blurb on the IOC's website. 'The goal of the Olympic Movement is to contribute to building a peaceful and better world by educating youth through sport practised without dis crimination of any kind, in a spirit of friendship, solidarity and fair play.' That is all very well, except it matches up with reality less and less with each passing games. In theory, Olympians from dusty villages in Africa compete on equal terms with those from the affluent suburbs of America. In practice, the Olympics is evolving into yet another form of FirstWorld protectionism, in which an ever larger proportion of medals is effectively reserved for blond beach bums from Sydney and subsidised professional sportsmen from Berkeley.

This is so partly because the IOC has abandoned any pretence of keeping to the ideals of amateurism proposed by Pierre de Coubertin when he founded the modern Olympic movement in 1892. These days, developed countries are simply buying their medals. What's more, they are boasting about it. The Department for Culture, Media and Sport proudly announces on its website that it is spending £100 million 'on our medal hopefuls for Athens'. Matthew Crawcour, spokesman for UK Sport, one of the quangos set up to dole out the money, says it is a bit smaller than that, but even he admits that £65 million is being spent on preparing athletes for the summer games, excluding the Paralympics. The money is being spent under something called the World Class Performance Programme, which supports athletes who can establish themselves in the world's top 20 in their sport. They are offered specialised training, plus an annual allowance of £10,000-412,000 to enable them to indulge in their training full-time.

This is one form of public expenditure that certainly seems to achieve its objective. Britain's miserable haul of 24 medals at the Atlanta Olympics of 1996 was more than doubled to 55 medals at Sydney, the biggest British haul since the Antwerp games of 1920 — a fact not unrelated to the £53.7 million of lottery money that was spent training athletes for the games. The IOC has no rules limiting the money that can be spent training an Olympian. If a country particularly wants its underwater judo team to strike gold, there is nothing to stop it spending a sum equivalent to the GDP of Ecuador in achieving it — even if it doesn't entirely match the 'spirit of fair play' mentioned by the IOC.

In showering money on Olympic sports, Britain is merely emulating the rest of the developed world. The richer the country that an athlete represents, the more likely he is to win a medal. Shortly before the Sydney Olympics in 2000, a pair of American economists, Andrew Bernard of the Tuck School of Business and Meghan Busse of the University of California, published a paper, 'Who Wins the Olympic Games?' This predicted the number of medals that would be won by each country competing in the games. Their forecast turned out to be startlingly accurate. America won 39 gold medals and 97 medals overall, exactly as they had predicted. They also correctly forecast that France would win 38 medals. In the case of 12 other countries, their predictions of medal tallies were out by just one medal.

Bernard and Busse had little knowledge of the competitors who would be going to Sydney. All they did was to employ a simple formula linking a country's medal tally to its Gross Domestic Product (GDP), with a few tweaks here and there to allow for the advantage of being host nation or of being a former communist country (communist regimes spent heavily on their sportsmen in spite of having low GDPs). They had derived the formula from studying the results of the Olympics since 1960.

It isn't just the raw expenditure which allows rich countries to outperform poor ones at the Olympics. So far in this article I have studiously used the word 'Olympian' instead of 'athlete' for good reason: the Olympics is becoming less and less about athletics and more and more about minority sports that require specialised equipment and are therefore beyond the experience or means of sportsmen in the Third World. Britain's medal tallies say it all. The extra medals won at Sydney came in spite of a sharp deterioration in our performance in track and field events: just six of the 55 medals came in athletics, with most coming in rowing, sailing and cycling. At Atlanta, nine out of 24 medals were in athletics, and at Barcelona in 1992, 12 out of 48 medals. At Athens, to judge by the public money going into minority sports, the trend will be even more pronounced: archers have received £193,000, canoeists £1.17 million, horse-riders £1.19 million and sailors £1.73 million.

The winning of a medal in rowing, sailing and cycling is of course an impressive physical feat, but compared with the purer achievements on the athletics track a large element of the success lies with technologists. The development of a cycle capable of winning an Olympic race is akin to that of a Formula One car. The same goes for rowing boats and sailing dinghys. The IOC's blurb about the equality of sports which are international and democratic' is a nonsense: how is a cyclist from The Gambia supposed to compete against the small army of carbon-fibre engineers and other specialists supporting the British team, with the aid of £1.3 million of public money?

'Educating youth through sport practised without discrimination of any kind'? How is landlocked Zambia supposed to compete in beach volleyball, a sport whose inclusion in the 2000 Olympics could not have been better calculated to boost Australia's medal tally? Of the 16 gold medals Australia won at Sydney, just one was in athletics. France and Italy won 13 golds apiece, yet not a single athletics medal between them. No doubt fencers, shooters and horse-riders work hard for their victories, yet they are at best competing with a quarter of the world, compared with runners, who are competing with the whole world. The heavy medal hauls by practitioners of minority sports on behalf of developed countries helped to smother the more impressive achievement at Sydney by Ethiopian athletes, who won four golds, and Kenyan athletes, who won two.

London would have a much more distinct, and therefore stronger, bid if it pared down the number of marginal sports. At the very least we could stop treating the winner of the synchronised swimming as the equal of the winner of the 100 metres; perhaps the leaders of the London bid should borrow the idea of 'half-blues' in varsity sports and award 'half-golds' in sports that fail to attract participants from a sufficient number of countries. The amount of money allowed to be spent on training athletes and buying their equipment should be limited, just as we limit the money allowed to be spent on election candidates.

Isn't it just a little unfair, I put it to Matthew Crawcour, that sportsmen from wealthy countries should be receiving all this money? 'It is certainly an advantage to our athletes,' he admits, 'but we do have development assistance programmes in place which help athletes around the world as well as our own.' Can he give me an example? 'We have a coaching exchange programme with China, in which Chinese coaches help our athletes in diving, gymnastics and table-tennis, while we supply help with their anti-doping programmes.' I see — so we get their coaches to improve our performance, and in return offer a scheme to prevent their athletes packing themselves with steroids. It doesn't take a genius to work out that the deal adds to our likely medal haul twice over.

The Olympics used to be the preserve of the amateur, of the poor competing with the rich on equal terms. Unless someone makes a stand, the gold medals hung round the necks of athletes competing in the 2012 games, be they in London or elsewhere, will be pitiful tokens compared with the bags of gold spent by rich countries in order to help propel themselves up the medal tables.