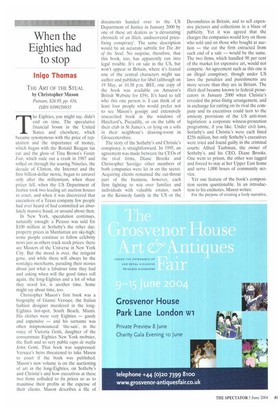 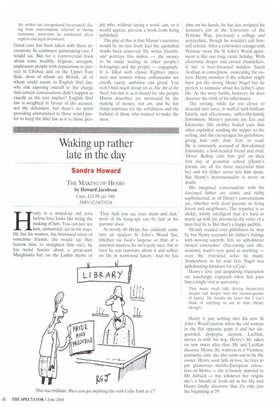 When the Eighties had to stop

THE ART OF THE STEAL by Christopher Mason Putnam, $26.95, pp. 416, ISBN 0399150935 The Eighties, you might say, didn't end on time. The speculative financial boom in the United States and elsewhere, which became synonymous with the price of reputation and the importance of money, which began with the Ronald Reagan tax Cut and the gloss of Tina Brown's Vanity Fair, which rode out a crash in 1987 and rolled on through the soaring Nineties, the decade of Clinton, the Internet and the first billion-dollar movie, began to unravel only after the millennium, when share prices fell, when the US Department of Justice took two leading art auction houses to court, and when it was discovered that executives of a Texan company few people had ever heard of had committed an absolutely massive fraud, or around about then.

In New York, speculation continues, naturally enough: a Picasso was sold for $100 million at Sotheby's the other day; property prices in Manhattan are sky-high; some people continue to follow celebrity news just as others track stock prices; there are Masters of the Universe in New York City. But the mood is over, the zeitgeist gone, and while there will always be the nostalgia merchants, parading their stories about just what a fabulous time they had and asking when will the good times roll again, the long-Eighties and a lot of what they stood for, is another time. Some might say about time, too.

Christopher Mason's first book was a biography of Gianni Versace. the Italian fashion designer murdered in the longEighties hot-spot, South Beach, Miami. His clothes were very Eighties — gaudy and expensive — and his surname was often mispronounced: -the-sais', in the voice of Victoria Gotti, daughter of the consummate Eighties New York mobster, the flash and so very public capo de mafia John Gotti. That book was suppressed: Versace's heirs threatened to take Mason to court if the book was published. Mason's new volume is on the auctioning of art in the long-Eighties, on Sotheby's and Christie's and how executives at these two firms colluded to fix prices so as to maximise their profits at the expense of their clients. Mason describes a file of

documents handed over to the US Department of Justice in January 2000 by one of these art dealers as 'a devastating chronicle of an illicit, undiscovered pricefixing conspiracy'. The same description would be an accurate subtitle for The Art of the Steal. No surprise, therefore, that this book, too, has apparently run into legal trouble. It's on sale in the US, but won't appear in Britain, where it's feared one of the central characters might sue author and publisher for libel (although on 19 May, at 10.38 p.m. BST, one copy of the book was available on Amazon's British Website for £59). It's hard to tell who this one person is. I can think of at least four people who would prefer not to see Mason's gossipy and extensively researched book in the windows of Hatchard's, Piccadilly, or on the table of their club in St James's, or lying on a sofa in their neighbour's drawing-room in Gloucestershire.

The story of the Sotheby's and Christie's conspiracy is straightforward. In 1995, an agreement was made between the CEOs of the rival firms, Diane Brooks and Christopher Savidge; other members of both companies were let in on the secret. Acquiring clients remained the cut-throat part of the business, however, each firm fighting to win over families and individuals with valuable estates, such as the Kennedy family in the US or the Devonshires in Britain, and to sell expensive pictures and collections in a blaze of publicity. Yet it was agreed that the charges the companies would levy on those who sold and on those who bought at auction — the cut the firm extracted from each end of a sale — would be the same. The two firms, which handled 90 per cent of the market for expensive art, would not compete. An agreement such as this one is an illegal conspiracy, though under US laws the penalties and punishments are more severe than they are in Britain. The illicit deal became known to federal prosecutors in January 2000 when Christie's revealed the price-fixing arrangement, and in exchange for ratting on its rival the company and its executives could turn to the amnesty provisions of the US anti-trust legislation: a corporate witness-protection programme, if you like. Under civil laws, Sotheby's and Christie's were each fined $256 million, but only Sotheby's executives were tried and found guilty in the criminal courts: Alfred Taubman, the owner of Sotheby's, and his CEO, Diane Brooks. One went to prison, the other was tagged and forced to stay at her Upper East home and serve 1,000 hours of community service.

Yet one feature of the book's composition seems questionable. In an introduction to his endnotes, Mason writes:

For the purpose of creating a lively narrative, the author has extrapolated (re-created) dialog from conversations referred to during testimony, interviews he conducted, press reports and legal documents.

Great care has been taken with these recreations, he continues: painstaking care, I would say. But for a controversial book about some wealthy, litigious, arrogant, unpleasant people with reputations to protect in Chelsea and on the Upper East Side, most of whom are British, all of whom could resort to English libel law, why risk exposing oneself to the charge that certain conversations didn't happen as exactly as the text implies? English libel law is weighted in favour of the accuser, not the defendant, but there's no point providing ammunition to those would prefer to keep the libel law as it is, those peo

ple who, without saying a word, can, so it would appear, prevent a book from being published.

The pity of this is that Mason's narrative would be no less lively had the quotation marks been removed. He writes fluently, and portrays this milieu — the money to be made trading in other people's belongings and the people — engagingly. It is filled with classic Eighties types: men and women whose enthusiasms are chiefly vanity, ambition and greed. You won't find much about art in The Art of the Steal; but this is as it should be: the people Mason describes are motivated by the making of money, not art, and he has sharp antennae for the selfishness and the bullshit of those who wanted to make the most.