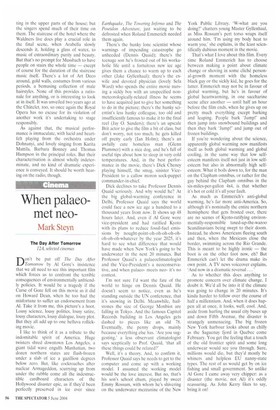 Don't be put off The Day After Tomorrow by Al Gore's insistence that we all need to see this important film which forces us to confront the terrible consequences of environmentally unfriendly policies. It would be a tragedy if the Curse of Gore fell on this movie as it did on Howard Dean, when he too had the misfortune to suffer an endorsement from Al. Take it from me. this picture's a hoot. Lousy science, lousy politics, lousy satire, lousy characters, lousy dialogue, lousy plot. But they all add up to one helluva rollicking movie.

I like to think of it as a tribute to the indomitable spirit of America. Huge twisters shred downtown Los Angeles, a giant tidal wave engulfs Manhattan, two dozen northern states are flash-frozen under a slab of ice a gazillion degrees below zero. But, like cockroaches after nuclear Armageddon, scurrying up from under the rubble come all the indestructible cardboard characters of the Hollywood disaster epic, as if they'd been perfectly preserved in ice ever since Earthquake, The Towering Inferno and The Poseidon Adventure, just waiting to be defrosted when Roland Emmerich needed them again.

There's the hunky lone scientist whose warnings of impending catastrophe go unheeded (Dennis Quaid); there's the teenage son he's frosted out of his workaholic life until a fortuitous new ice age gives them a chance to warm up to each other (Jake Gyllenhaal); there's the exwife and devoted physician (lovely Sela Ward) who spends the entire movie nursing a sickly boy with an unspecified nonmeteorologically-related illness he seems to have acquired just to give her something to do in the picture; there's the hunky scientist's less hunky colleague, too old and insufficiently famous to make it to the final reel (Jay 0. Sanders); there's an upscale Brit actor to give the film a bit of class, but don't worry, not too much, he gets killed off pretty early (Ian Holm); there's an awfully cute homeless man (Glenn Plummer) with a nice dog, and he's full of useful tips about how to sleep in very cold temperatures. And, in the best performance in the movie, there's Dick Cheney playing himself, the smug, sinister VicePresident to a callow moron sock-puppet commander-in-chief.

Dick declines to take Professor Dennis Quaid seriously. And why would he? At the big global-warming conference in Delhi, Professor Quaid says the world could face a new ice age a hundred to a thousand years from now. It shows up 48 hours later. And, even if Al Gore were vice-president and had ratified Kyoto with its plans to reduce fossil-fuel emissions by nought-point-oh-oh-oh-oh-ohoh-oh-oh-whatever by the year 2025, it's hard to see what difference that would have made when New York's going to be underwater in the next 20 minutes. But Professor Quaid's a palaeoclimatologist and the Vice-President's a neoconservative, and when palaeomeets neoit's no contest.

I'm not sure I'd want the fate of the world to hinge on Dennis Quaid. He doesn't seem to notice, even as he's standing outside the UN conference, that it's snowing in Delhi. Meanwhile, hailstones the size of George Monbiot are falling in Tokyo. And the famous Capitol Records building in Los Angeles gets dashed to pieces like an old 78. Eventually, the penny drops, mainly because everything else has. Are you suggesting,' a less observant climatologist says sceptically to Prof. Quaid, 'that all these things could be related?'

Well, it's a theory. And, to confirm it, Professor Quaid says he needs to get to the computer and come up with a working model. I assumed the working model would be the love interest. But no, that's his son's school chum, played by sweet Emmy Rossum, with whom he's shivering on the underwater mezzanine of the New York Public Library. 'W-what are you doing?' chatters young Master Gyllenhaal, as Miss Rossum's pert torso wraps itself around him. 'I'm using my body heat to warm you,' she explains, in the least scientifically dubious moment in the movie.

That's what I love about this film, Every time Roland Emmerich has to choose between making a point about climate change or shoving in some cliché personal-growth moment with the homeless black guy or the sickly kid, he goes for the latter. Emmerich may not be in favour of global warming, but he's in favour of global heartwarming, in one saccharine scene after another — until half an hour before the film ends, when he gives up on pretty much everything except barking and leaping. People bark 'Jump!' and then jump into snowbound buildings and then they bark lump!' and jump out of frozen buildings.

If you're wondering about the science, apparently global warming now manifests itself as both global warming and global cooling, in the same way that low selfesteem manifests itself not just in low selfesteem but also in abnormally high selfesteem. What it boils down to, for the man on the Clapham omnibus, or rather for the guy behind the Clapham omnibus in the six-miles-per-gallon 4x4, is that whether it's hot or cold it's all your fault.

As much as Emmerich's anti-global warming, he's far more anti-America. So, although it's nominally the entire northern hemisphere that gets frosted over, there are no scenes of Kyoto-ratifying environmentally-responsible taxed-up-the-wazoo Scandinavians being swept to their doom. Instead, he shows Americans fleeing south and then, when the Mexicans close the border, swimming across the Rio Grande. This is meant to be highly ironic — the boot is on the other foot now, eh? But Emmerich can't let the drama make its own point. A TV news voiceover explains, 'And now in a dramatic reversal ... '

As to whether this does anything to promote concern over climate change, I doubt it. We'd all be into it if the climate was going to change in 20 minutes. It's kinda harder to follow over the course of half a millennium. And, when it does happen all at once, it looks, well, cool. And, aside from hurling the usual city buses up and down Fifth Avenue, the disaster is strangely unmenacing. The big frozen New York harbour looks about as chilly as the Saguenay fjord in Quebec come February. You get the feeling that a touch of the old frontier spirit and some long underwear would see you through. Sure, millions would die, but they'd mostly be whiners and helpless EU nanny-state types. The rest of us would get by on ice fishing and small government. So unlike Al Gore I came away very chipper: as a disaster (the movie, not Al) it's oddly reassuring. As John Kerry likes to say, bring it on!