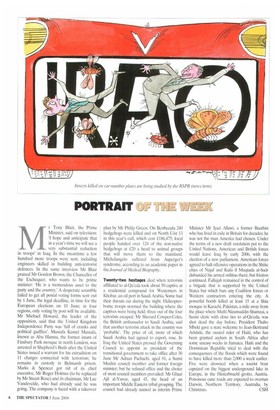 hope and anticipate that in a year's time we will see a very substantial reduction in troops' in Iraq. In the meantime a few hundred more troops were sent, including engineers skilled in building anti-terrorist defences. In the same interview Mr Blair praised Mr Gordon Brown, the Chancellor of the Exchequer, who wants to be prime minister: 'He is a tremendous asset to the party and the country.' A desperate scramble failed to get all postal voting forms sent out by 1 June, the legal deadline, in time for the European elections on 10 June; in four regions, only voting by post will be available. Mr Michael Howard, the leader of the opposition, said that the United Kingdom Independence Party was 'full of cranks and political gadflies'. Mustafa Kamel Mustafa, known as Abu Harnza, the former imam of Finsbury Park mosque in north London, was arrested in Shepherd's Bush after the United States issued a warrant for his extradition on 11 charges connected with terrorism; he remains in custody in Belmarsh prison. Marks & Spencer got rid of its chief executive, Mr Roger Holmes (to be replaced by Mr Stuart Rose) and its chairman, Mr Luc Vandevelde, who had already said he was going. The company is faced with a takeover

plan by Mr Philip Green. On Benbecula 240 hedgehogs were killed and on North Uist 13 in this year's cull, which cost £186,475; local people handed over 124 of the non-native hedgehogs at £20 a head to animal groups that will move them to the mainland. Michelangelo suffered from Asperger's syndrome, according to an academic paper in the Journal of Medical Biography.

Twenty-two hostages died when terrorists affiliated to al-Qa'eda took about 50 captive at a residential compound for Westerners in Khobar, an oil port in Saudi Arabia. Some had their throats cut during the night. Helicopterborne troops stormed the building where the captives were being held; three out of the four terrorists escaped. Mr Sherard Cowper-Coles, the British ambassador to Saudi Arabia, said that another terrorist attack in the country was 'probable'. The price of oil, more of which Saudi Arabia had agreed to export, rose. In Iraq the United States pressed the Governing Council to appoint as president of the transitional government to take office after 30 June Mr Adnan Pachachi. aged 81, a Sunni Muslim council member and former foreign minister, but he refused office and the choice of most council members prevailed: Mr Ghazi Ajil al-Yawar, aged 45, the head of an important Middle Eastern tribal grouping. The council had already named as interim Prime

Minister Mr Iyad Allawi, a former Baathist who has lived in exile in Britain for decades; he was not the man America had chosen. Under the terms of a new draft resolution put to the United Nations, American and British forces would leave Iraq by early 2006, with the election of a new parliament. American forces agreed to halt offensive operations in the Shiite cities of Najaf and Kufa if Muqtada al-Sadr disbanded his armed militias there; but friction continued. Fallujah remained in the control of a brigade that is supported by the United States but which bars any Coalition forces or Western contractors entering the city. A powerful bomb killed at least 15 at a Shia mosque in Karachi, Pakistan, a mile away from the place where Mufti Nizamuddin Shamzai, a Sunni cleric with close ties to al-Qa'eda, was shot dead the day before. President Thabo Mbeki gave a state welcome to Jean-Bertrand Aristide, the ousted ruler of Haiti, who has been granted asylum in South Africa after some uneasy weeks in Jamaica_ Haiti and the Dominican Republic tried to deal with the consequences of the floods which were found to have killed more than 2,000 a week earlier. Five were drowned when a tourist boat capsized on the biggest underground lake in Europe, in the Hinterbruehl grotto, Austria. Poisonous cane toads are expected to overrun Darwin, Northern Territory, Australia, by Christmas. CSH