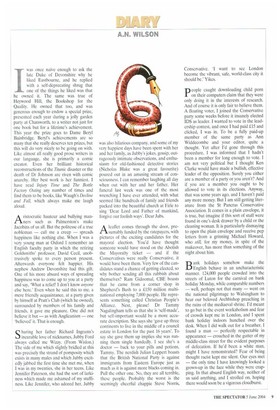 I was once naive enough to ask the late Duke of

Devonshire why he liked Eastbourne, and he replied with a self-deprecating shrug that one of the things he liked was that he owned it. The same was true of Heywood Hill, the Bookshop for the Quality. He owned that too, and was generous enough to endow a special prize, presented each year during a jolly garden party at Chatsworth, to a writer not just for one book but for a lifetime's achievement. This year the prize goes to Dame Beryl Bainbridge. Beryl's achievements are so many that she really deserves ten prizes, but this will do very nicely to be going on with. Like almost all really good prose writers in our language, she is primarily a comic creator. Even her brilliant historical reconstructions of the Titanic disaster or the death of Dr Johnson are riven with comic anarchy. Her best work is her funniest. I have read Injwy Time and The Bottle Factory Outing any number of times and find them to be books, like Waugh's Decline and Fall, which always make me laugh aloud.

A ristocratic hauteur and bullying manArt ners such as Palmerston's make Jacobins of us all. But the politesse of a true nobleman — call me a creep — spreads happiness like nothing else. When I was a very young man at Oxford I remember an English faculty party in which the retiring Goldsmiths' professor, David Cecil, unobtrusively spoke to every person present. Afterwards everyone felt happier. His nephew Andrew Devonshire had this gift. One of his more absurd ways of spreading happiness was to come up to you at a party and say, 'What a relief! I don't know anyone else here.' Even when he said this to me, a mere friendly acquaintance, at a party given by himself at Pratt's Club (which he owned), surrounded by members of his family and friends, it gave me pleasure. One did not believe it but — as with Anglicanism — one 'believed' it. That is enough.

haring her father Richard Ingrams's incurable love of nicknames, Jubby Ford always called me Wizzy. (From Wislon.) The side of me which slightly bridled at this was precisely the strand of pomposity which exists in many males and which Jubby excitedly jabbed the first time she met me, when I was in my twenties, she in her teens. Like Jennifer Paterson, she had the sort of larkiness which made me ashamed of my stuffiness. Like Jennifer, who adored her, Jubby was also hilarious company, and some of my very happiest days have been spent with her and her family, as Jubby's jokes, gossip, outrageously intimate observations, and enthusiasm for old-fashioned detective stories (Nicholas Blake was a great favourite) poured out in an amusing stream of consciousness. I can remember laughing all day when out with her and her father. Her funeral last week was one of the most wrenching I have ever attended, with what seemed like hundreds of family and friends packed into the beautiful church at Fine to sing 'Dear Lord and Father of mankind, forgive our foolish ways'. Dear Jubs.

Aleaflet comes through the door, presumably funded by the ratepayers, with pictures of the exciting candidates for the mayoral election. You'd have thought someone would have stood on the Abolish the Mayoralty ticket — and if the Conservatives were really Conservative, it would have been them. Very few of the candidates stand a chance of getting elected, so why bother sending all this rubbish about themselves? Ram Gidoomal, CBE boasts that he came from a corner shop in Shepherd's Bush to a £150 million multinational employing 7,000 people. He represents something called Christian People's Alliance. Next, please! Dr Tammy Nagalingham tells us that she is `self-made', but self-important would be a more accurate description. She says she 'gave up three continents to live in the middle of a council estate in London for the past 16 years'. To say she gave them up implies she was running them single handedly. I see she's a doctor — back to your pills and potions, Tammy. The nerdish Julian Leppert boasts that the British National Party is against immigrants from Eastern Europe just as much as it is against more blacks coming in. Pull the other one. No, they are all terrible, these people. Probably the worst is the seemingly cheerful chappie Steve Norris,

Conservative. 'I want to see London become the vibrant, safe, world-class city it should be.' Yikes.

people caught downloading child porn 1 on their computers claim that they were only doing it in the interests of research. And of course it is only fair to believe them. A floating voter, I joined the Conservative party some weeks before it insanely elected IDS as leader. I wanted to vote in the leadership contest, and once I had paid £15 and clicked, I was in. To be a fully paid-up member of the same party as Ann Widdecombe and your editor, quite a thought. Yet after I'd gone through this procedure, I was informed that I hadn't been a member for long enough to vote. I am not very political but I thought Ken Clarke would have made a bullish, effective leader of the opposition. Surely you either are a member of a party or you aren't? And if you are a member you ought to be allowed to vote in its elections. Anyway, that was some years ago, and I haven't paid any more money. But I am still getting literature from the St Pancras Conservative Association. It comes in a plain envelope, it is true, but imagine if this sort of stuff were found in one's desk drawer by a child or the cleaning woman. It is particularly dismaying to open the plain envelope and receive pep letters from a grinning Michael Howard, who still, for my money, in spite of the makeover, has more than something of the night about him.

Bank holidays somehow make the English behave in an uncharacteristic manner. 124,000 people crowded into the streets of Luton for the carnival on bank holiday Monday, while comparable numbers — well, perhaps not that many — went on the national pilgrimage to Walsingham to hear our beloved Archbishop preaching in the ruins of the mediaeval shrine. I'd meant to go but in the event workaholism and fear of crowds kept me in London, and I spent bank holiday indoors hunched over the desk. When I did walk out for a breather, I found a man — perfectly respectable in appearance — crouched in the gutter of my middle-class street for the evident purposes of defecation. If he'd been a white man, might I have remonstrated? Fear of being thought racist kept me silent. Our eyes met — the only time I have knowingly looked a grown-up in the face while they were crapping. In that absurd English way, neither of us said anything, and I strolled on, hoping there would soon be a vigorous cloudburst.