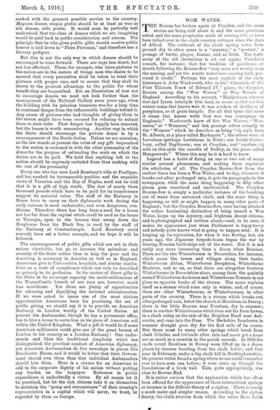 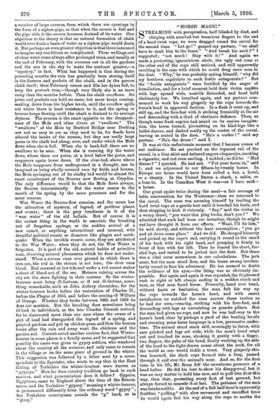 rE Bourne has broken again at Croydon, and the same stories are being told about it, and the same questions asked, and the same prophecies made of coming evil, as have been talked over in the chalk country cottages since the days of Alfred. The outbreak of the chalk spring water from ground dry in other years is a "mystery," a "portent," a presage of battle, plague, famine, and so forth. The testi- mony of the old chroniclers is set out again ; Camden's remark, for instance, that the tradition of pestilence or dearth following the Bourne-flow " may seem not worthy once the naming, and yet the events sometimes ensuing bath pro- cured it credit." Perhaps the most explicit of the early historians is John Warkworth, who in his " Chronicle of the First Thirteen Years of Edward IV." places the Croydon Bourne among the " Woo Waters " or Woe Waters of England. According to his account, " Englyshmen whenne thei dyd fyrste inhabyde this land, as soone as thei see this watere renne thei knewe wele it was a token of derthe or of pestylence, or of grate batayle. For all that tyme thei sawe it renne thei knewe welle that woo was commynge to Englande." Warkworth knew of five Woe Waters, " Woe- meres," or " Womeres," and this passage refers actually to the " Womere " which he describes as being "vij myle from St. Alban's, at a place called Markayate "; the others were at Lavesham (perhaps Lewisham) in Kent ; one beside Canter- bury, called Naylbourn ; one at Croydon ; and "another, vij mile on this syde the castelle of Dodley, in the place called Hungerevale." Where this may be it is hard to know.

Legend has a habit of fixing on one or two out of many similar natural phenomena, and making them represent the attributes of all. The Croydon Bourne-flow from the earliest times has been a Woe Water, and to-day, whenever it breaks out after prolonged rain, it gets its paragraphs in the newspapers, while the same thing happening in fifty other places goes unnoticed and unchronicled. The Croydon Bourne-flow is simply a particular instance of the breaking out of water from saturated chalk, and the same thing is happening, or will or might happen, in many other parts of England ; but the Croydon Bourne-flow, once having attained the rather fascinating distinction of being named a Woe Water, keeps up the mystery, and frightens decent citizens, and is photographed and written about,—and, to be sure, it makes its appearance just when Parliament is topsy-turvy and nobody quite knows what is going to happen next. It is keeping up its reputation, for when it was flowing last, six years ago, the Japanese torpedo-boats began the war by blowing Russian battleships out of the water. But it is not really any more interesting than a dozen other Bournes. There are the two Winterbornes in Dorsetshire, for instance, which name the towns and villages along their banks, Winterborne Abbas, Winterborne Steepleton, Winterborne Monkton, and so on, so that there are altogether fourteen Winterbornes in Dorsetahire alone, among them the quaintly named Winterborne Anderson and Winterborne Tomson in one place on opposite banks of the stream. The name explains itself as a stream which runs only in winter, and, of course, there are other Winterbourns, or Winterbournes, in other parts of the country. There is a stream which breaks out, after prolonged rain, below the church at Merstham in Surrey ; there is the little Bourne near Farnham, dry in summer; there is another Winterbourne which rises not far from Lewes, in a chalk valley on the side of the Brighton Road near Ash- combe, and runs into the Ouse. The Berkshire Lambourn in summer drought goes dry for the first mile of its course. But there must be many other springs which break from chalk hillsides and lowlands after rain and never get a name nor so much as a mention in the parish records. In 1904 the roads round Bookham in Surrey were lifted up in a dozen places by streams bursting from the chalk below; and that year in February, under a big chalk hill in Buckinghamshire, the present writer found a spring where no one could remember ever to have seen one before ; it even came up through the foundations of a brick wall. This, quite appropriately, was close to Bourne End.

It is rather curious that the explanation which has often been offered for the appearance of these intermittent springs or bournes is the difficult theory of a siphon. There is surely a much easier and simpler reason. According to the siphon theory, the chalk stratum from which the water flows holds a number of large caverns, from which there are openings in the form of a siphon-pipe, so that when the cavern is full and the pipe with it the cavern becomes drained of its water. One objection to the theory is that no natural formation of chalk would ever drain a basin of water as a siphon-pipe would drain it. But perhaps an even greater objection is that there isno need to imagine any conditions so complicated. These wellings-out of clear water come always after prolonged rains, and usually at the end of February, with the crocuses out in all the gardens and the sun in the sky to make the contrast greater,—a "mystery," in fact. What has happened is that during the preceding months the rain has gradually been storing itself in the fissures and pockets of the chalk, and in the porous chalk itself ; then February comes and fills her dykes full, to keep the proverb true,—though very likely she is no more rainy than the months before. Then the chalk overflows. Its pores and pockets can hold no more, but more keeps coming, soaking down from the higher levels, until the overflow spills out where there is least resistance to it, and the spring or bourne keeps flowing until the chalk is drained to its average dryness. The process is the exact opposite to the disappear. ance of the Mole and other rivers at " swallows." The " swallows" of the Mole by Burford Bridge near Dorking are not so easy to see as they used to be, for floods have altered the banks of the stream, but they are really large pores in the chalk bed along, over, and under which the Mole flows when she is full. When she is bank-full there are no swallows to be seen. When she is running dry the water flows, where there are pores, at a level below the pores, and reappears again lower down. If the river-bed, above where the Mole reappears from underground in a drought, can be imagined as being wholly covered over by fields and houses, the Mole springing out of its chalky bed would be almost the exact counterpart of the Bourne now flowing at Croydon. The only difference would be that the Mole flows always, the Bourne intermittently. But the water comes to the mouth of the spring by the same processes and for the same reasons.

Woe Water the Bourne-flow remains, and the name has the attraction of mystery, of legend, of perilous places and events ; there is the grey loneliness in it of the " wan water " of the old ballads. But of course it is the easiest thing in the world to associate the breaking out of forgotten springs, or the sudden arrival of a new comet, or anything intermittent and unusual, with dreadful political events or disasters like plague and earth- quake. When the terrible events occur, they are attributed to the Woe Water ; when they do not, the Woe Water is forgotten. It is part of the old, natural habits of primitive man, observing natural phenomena which he does not under- stand. When a stream runs over ground in which there is iron ore, the red in the stream is not iron; the river runs blood. Red seaweed at low tide and under a red sunset makes a sheet of blood out of the sea. Meteors raining across the sky are the stars fighting in their courses. So the winter- bonrnes mast bring ill-fortune, or if not ill-fortune, some- thing remarkable, such as John Aubrey chronicles; for the winter-bourns broke before the restoration of Charles II., before the Plague of 1665, and before the coming of William of Orange. Whether they broke between 1665 and 1688 he does not mention. But the breaking does sometimes bring ill-luck to individuals, as the late Charles Cornish noticed, for he discovered more than one case where the owner of a plot of land had disregarded the legend of a spring, and planted gardens and put up chicken-pens, and then the bourne broke after the rain and away went the chickens and the garden soil. Cornish noted another curious fact, that Winter- bourne in some places is a family name, and he suggested that possibly the name was given to gypsy settlers, who wandered about the country all the summer, and only came to remain in the village or on the same piece of ground in the winter. This suggestion was followed by a letter sent by a corre- spondent to the Spectator, who wrote to say that in the East Riding of Yorkshire the winter-bournes were known as " gypseys." How far does country tradition go back in such matters, and what pronunciation does it follow ? Gypsies, Egyptians, came to England about the time of the Renais- sance, and the Yorkshire " gypsey," meaning a winter-bourne, is pronounced differently from the ordinary word " gypsy " ; the Yorkshire countryman sounds the "g" hard, as in " gimp."