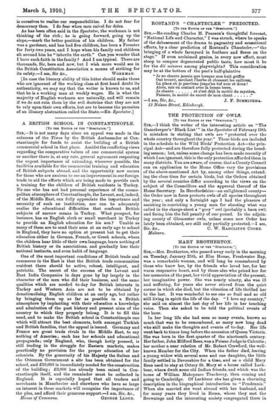 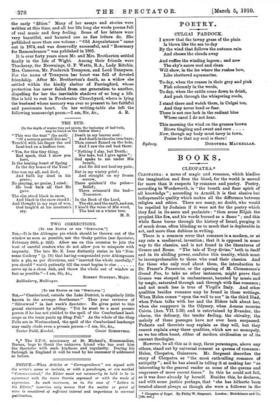 f To THE EDITOR Or THE "SPECTATOR."]

SIR,—Mrs. Brotherton, who passed away early in the morning on Tuesday, January 25th, at Elm House, Freshwater Bay, was a remarkable woman, and will long be remembered by those who knew her, by the friends who loved her, for her warm responsive heart, and by those also who prized her for her memories of the past, her vivid appreciation of the present, her imaginative power. She was nearly ninety, she was ill and suffering, for years she never stirred from the quiet corner in which she died, but the vibration of life thrilled her to the last. It was wonderful to see one so frail and so old still living in spirit the life of the day. "I love my country," she said on almost the last day of her life in her touching voice. Then she asked to be told the political events of the hour.

In her long life she had seen so many events, known so much that was to be remembered, so many now long dead who still make the thoughts and events of to-day. Her life went back to times long before the accession of Queen Victoria. She was born in the first quarter of the nineteenth century. Her father, John Milford Rees, was a Puisne Judge in Calcutta ; her mother a near relation of Mr. Robert Crawford, the well- known Member for the City. When the father died, leaving a young widow with several sons and one daughter, the little family settled in Devonshire for a time, and as a child Mary Rees used to stay at Ottery St. Mary at a house called Lark- bear, where dwelt some old Indian friends, and which was the home of William Makepeace Thackeray, then coming and going to Cambridge. Of Larkbear she has given a charming description in the biographical introduction to " Pendennis." When she married she went abroad with her husband, and for many years they lived in Rome, where they met the Brownings and the interesting society congregated there in the early "fifties." Many of her essays and stories were written at this time, and all her life long she wrote poems full of real music and deep feeling. Some of her letters were very beautiful, and haunted one as fine letters do. She published more than one volume : " Old Acquaintance " came out in 1874, and was deservedly successful, and "Rosemary for Remembrance" was published in 1895.

It is over forty years since Mr. and Mrs. Brotherton settled finally in the Isle of Wight. Among their friends were Thackeray, the Brownings, G. F. -Watts, R.A., Lady Ritchie, Mrs. Cameron, Mr. Frederick Tennyson, and Lord Tennyson. For the name of Tennyson her heart was full of devoted friendship. After Mr. Brotherton's death, as a widow she settled within the kindly shelter of Farringford, whose protection has never failed from one generation to another, dispelling for her the inevitable shadows of so long a life. She is laid to rest in Freshwater Churchyard, where is lying the husband whose memory was ever so present to her faithful and passionate heart. On her writing-table she left the