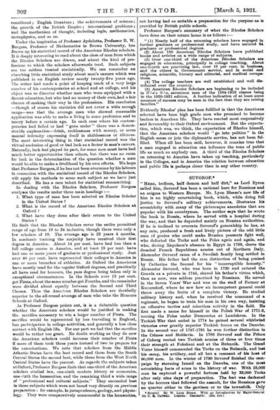 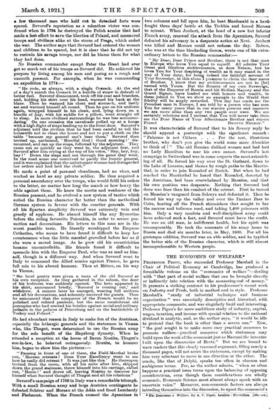 " HERO, buffoon, half demon and half dirt," as Lord Byron called him, Suvorof has been a national hero for Russians and an enigma to Western Europe. Mr. Lyon Blease's new life of him is an highly entertaining book, which, while doing full justice to Suvorof's military achievements, illustrates his eccentricity with many of the picturesque anecdotes that are popular with his countrymen. The author says that he wrote the book in Russia, where he served with a hospital during the war, and that he depended mainly on Russian authorities. If he is inclined to overrate Suvorofs generalship he has, at any rate, produced a fresh and lively picture of the odd little man of genius who could make Russian peasants fight well, who defeated the Turks and the Poles again and again, and who, during Napoleon's absence in Egypt in 1799, drove the dreaded French Republican armies out of Northern Italy. Alexander Suvorof came of a Swedish family long settled in Russia. His father had the rare distinction of being praised by Catherine the Second for his " incorruptible honesty." Alexander Suvorof, who was born in 1730 and entered the Guards as a private in 1745, shared his father's virtue which, then as now, was seldom practised by Russians. He served in the Seven Years' War and was on the staff of Fermor at Kunersdorf, where he saw how an incompetent general could throw away the fruits of a complete victory. He studied military history and, when he received the command of a regiment, he began to train his men in his own way, insisting on offensive tactics and relentless activity in the field. He first made a name for himself in the Polish War of 1771-2, routing the Poles under Dumouriez at Landskron. In the Turkish War that ended in 1774 he gained several whirlwind victories over greatly superior Turkish forces on the Danube. In the second war of 1787-1791 he won further distinction in the Crimea and Moldavia. In 1789 Suvorof and the Prince of Coburg routed two Turkish armies of three or four times their strength at Fokshani and at the Rnimnik. The Grand Vizier himself commanded the Turks on the Ruimnik, and lost his camp, his artillery, and all but a remnant of his host of 90,000 men. In the winter of 1790 Suvorof finished the cam- paign by storming Izmail on the Danube, one of the most astonishing feats of arms in the history of war. With 25,000 men he captured a powerful fortress held by 36,000 Turks after only nine days of preparation. The feat was darkened by the horrors that followed the assault, for the Russians gave no quarter either to the garrison or to the townsfolk. Only • suvorof. By W. Lyon Bleu*. With an Introduction by Idalor-General Sir C. B. Caftan. rower': Constable. [Us. net.] a few thousand men who held out in detached forte were spared. Suvorof s reputation as a relentless victor was con- firmed when in 1794 he destroyed the Polish armies that had made a. last effort to save the liberties of Poland, and massacred troops and civilians alike at the storm of Frage, which ended the war. The author says that Suvorof had ordered the women and children to be spared, but it is clear that he did not try to restrain his savage troops, nor did he blame them for what they had done.

No Russian commander except Peter the Great had ever got so much out of his troops as Suvorof did. He walleyed his purpose by living among his men and posing as a rough and uncouth peasant. For example, when ,he was commanding an expedition in 1774 :—

" He rode, as always, with a single Cossack. At the end of a day's march the Cossack lit a bundle of straw in.defanit of better fuel. Suvorof dismounted, took off his ()oat and breeches, and, holding his shirt over his head, warmed his back, at the blaze. Then he warmed his chest and stomach, and lastly sat and warmed himself all round. Then he put on his uniform again, wrapped himself in his cloak, and, lying down on a bundle of hay, with his saddle for a pillow, went straight off to sleep. In more civilized surroundings he was lees accommo- dating. On one occasion the cavalcade pulled up at a house with a high flight of steps leading up to the front door. Suvorof's adjutant told the civilian that he had been careful to tell the housewife not to clean the house and not to put a cloth on the table ' because my general can't bear them.' Suvorof then trotted up, exclaimed, Merciful God 1 Good morning ! dis- mounted, and ran up the steps, followed by the adjutant. They came out as quickly as they went in, the adjutant first, and Suvorof after him crying at the top of his voice, Hey, hey, hey, hey 1 ' Down the steps and out through the gates they went. In the road some one contrived to pacify the frantic general, and it was explained that the unfortunate woman had disregarded her orders and had laid the cloth."

He made a point of personal cleanliness, had no vices, and worked as hard as any private soldier. He thus acquired personal ascendency over the troops, who would fulfil his orders to the letter, no matter how long the march or how heavy the odds against them. He knew the merits and weakness of the Russian peasant, and he evolved a new system, of tactics which suited the Russian character far better than the methodical German system in favour with the courtier generals. With all his Spartan simplicity Suvorof was extremely vain and greedy of applause. He abased himself lik,e any Byzantine , before the ruling favourite Potemkin, in order to secure pro- motion and decorations. His letters to this man are in the worst possible taste. He literally worshipped the Empress Catherine, who seems to have found it difficult to keep her countenance when the little marshal grovelled before her as if she were a sacred image. As he grew old his eccentricities became uncontrollable. His friends found it difficult to rpooncile him with the Emperor Paul, who was as mad ae him- self, though in a different way. And when Suvorof went to Italy to command the Allied armies against France, he gave full rein to his absurd humour. Thus at Mitten, on his way to Vienna,

" the local gentry were given a taste of the old. Suvorof at his own reception. As they gathered in the saloon, the door of his bedroom was suddenly opened. The hero appeared in his shirt, announced briefly, Suvorof is coming out,' and withdrew. A minute later he emerged, wearing full uniform and all his decorations, and solemnly received the guests. Thus he announced that the conqueror of the French would be no polished and refined penitent, but the same recalcitrant old porcupine who had erected his bristles against social and military pedants in the palaces of Petersburg and on the -battlefields of Turkey and Poland."

He had abundant reason in Italy to snake fun of the Austrians, especially the lethargic generals and the statesmen in Vienna who, like Thugut, were determined to use the Russian army for the sole benefit of the Hapsburg dynasty. When he attended a reception at the house of Baron Nostitz, Thugnt's son-indaw, he behaved outrageously. NOStitE, to humour him, began to show him the pictures :— " Pausing in front of one of them, the Field-Marshal broke Out, ' Moreau retreats 1 Does Your Excellency want to see how he really did retreat ? It was just like this.' He thereupon trotted from the room, with all his suite after him, skipped down the grand staircase, threw himself into his carriage, called out, Home t ' and drove off, leaving Noetitz to disoover for himself what Suvorof thought of Thugut and 411 his relations."

Sword's campaign of 1799 in Italy was a remarkable triumph. With a small Russian army and large Austrian contingents he defeated Scherer and Mereau at the Adda and freed Lombardy and Piedmont. When the French crossed the Apennines in two columns and fell upon him, he beat Macdonald in a hard- fought three days' battle at the Trebbia and forced Moreau

to retreat. When Joubert, at the head of a new but inferior

French army, renewed the attack from the Apennines, Suvorof defeated his adversary in a desperate action at Novi. Joubert was killed and Moreau could not redeem the day. Nelson, who was at the time blockading Genoa, wrote one of his extra- ordinary letters to the Russian oommander:-- " My Dear, Dear Prince and Brother, there is net that man in Europe who loves You equal to myself. All admire Your Great and Glorious atchievements, ae does Nelson, but he loves You for Your despising of wealth as it may stand in the way of Your duty, for being indeed the faithfull servant of Your Sovereign, in this alone I presume to claim the dear name of Brother. I know that my atchievernents are not to (be] named with Yours. But the Bounty of my own Sovereign, that of the Emperor of Russia and his Sicilian Majesty and the Grand Signor, have loaded me with honors and wealth, in these -joined to You we show an example to the World that fidelity will be amply rewarded. This day has made me the Proudest man in Europe, I am told by a person who has seen You for many years that in our stature persons and manners we are more alike than any two people ever were. We are certainly relations and I entreat that You will never take from me the Daar Name of Your Affectionate Brother and sincere

It was characteristic of Suvorof that to his flowery reply he should append .a postscript with the significant remark : " Palermo is not Cithera . . . For the rest, illustrious brother, why don't you give the world some more Aboukirs to think of 2 " The old Russian disliked women and had had no Lady Hamilton to mar his own career. Suvorof s last

campaign in Switzerland was in some respects the most,astonish- Mg of all. He forced his way over the St. Gothard, down to the Lake of Lucerne, and thence by rough paths-to the Muotto- thal, in order to join Korsakof at Zurich. But when he had reached the Muottothal he heard that Korsakof, deserted, by the Austrians, bad been overwhelmed by ildassena, and that his own position was desperate. Nothing that Suvorof had

done was finer than his conduct of the retreat. First he turned on Massena's vanguard from. Schwyz and defeated it. Then he forced his way up the valley and over the Panixer Pass to Coire, beating off the French skirmishers that sought to bar the narrow and toilsome road, and taking 1,400 prisoners with him. Only a very resolute and well-disciplined army could have achieved such a feat, and Suvorof must have the credit. He was an old man, in indifferent health, but his spirit was

unconquerable. He took the remnants of his army home to Russia and died six months later, in May, 1800. For all his grotesque oddities, Suvorof was an able soldier, and he typified the better side of the Russian character, which is still almost incomprehensible to Western people.