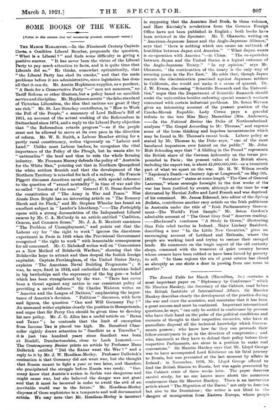 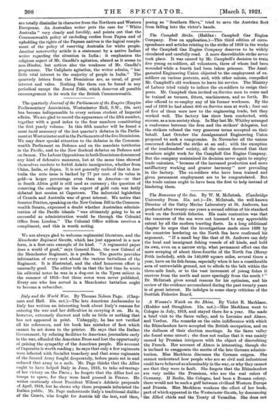 The Round Table for Maroh (Macmillan, be.) oontains a most

important paper on " Diplomacy by Conference " which Sir Maurice Hankey, the Secretary of the Cabinet, read before the British Institute of International Affairs. Sir Maurice Hankey describes clearly the development of the practice during the war and since the armistice, and maintains that it has been a great success and must be continued. Important international questions, he says, " can only be settled in conference by persons who have their hand on the pulse of the political conditions and currents of thought in their respective countries, who have at Immediate disposal all the technical knowledge which Govern. ments possess ; who know how far they can persuade their fellow-countrymen to go in the direction of compromise ; and who, insomuch as they have to defend their policy before their respective Parliaments, are alone in a position to make real concessions." Sir Maurice Hankey says that Mr. Lloyd George was to have accompanied Lord Kitchener on his fatal journey to Russia, but was prevented at the last moment by affairs in Ireland ; in November, 1916, Mr. Lloyd George offered to lead the British Mission to Russia, but was again prevented by the Cabinet crisis of three weeks later. The paper deserves careful study, for no one knows more about the numerous conferences than Sir Maurice Hankey. There is an instructive article about " The Migration of the Races," not only to America but also to the Dominions ; the writer is not blind to t ho dangers of immigration from Eastern Europe, whose people

are totally dissimilar in character from the Northern and Western Europeans. An Australian writer puts the case for " White Australia " very clearly and forcibly, and points out that the Commonwealth policy of excluding coolies from Papua and of upholding the rights of the Papuan natives is the logical comple- ment of the policy of reserving Australia for white people. Another noteworthy article is a statement by a native Indian writer regarding the situation ill India ; it emphasizes the religious aspect of Mr. Gandhi's agitation, absurd as it seems to non-Hindus, but notices also the weakness of Mr. Gandhi's programme. The Caliphate agitation, the writer admits, " has little vital interest to the majority of people in India." The quarterly letters from the Dominions are, as usual, of great interest and value. Nothing like them can be found in any periodical except the Round Table, which deserves all possible encouragement in its work for the British Commonwealth.