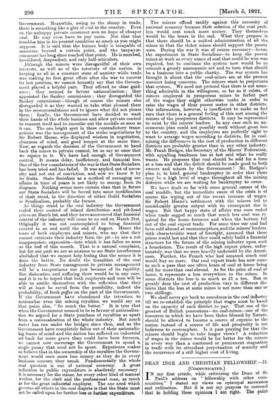 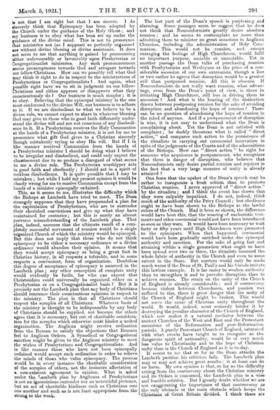 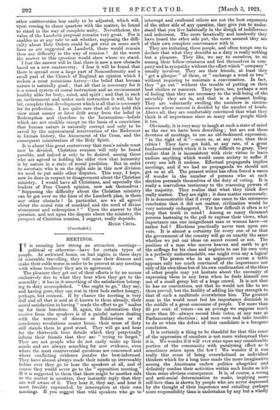 I N my fi rst article, while criticizing the Dean of St.

One fears that the upshot of the Dean's speech may be rather to inaugurate a fresh schism than to promote Christian reunion. I never approved of " direct action " by the ritualists ; and I think the event has shown that they were culpably impatient. I do not, indeed, think much of the authority of the Privy Council ; but obedience ought to have been shown to the Bishops as the lawful rulers of the Church. Had it been so shown, the difference would have been this, that the wearing of eucharistic vest- ments and other ceremonial would not have been introduced so soon as they were. It would have been necessary to wait forty or fifty years until High Churchmen were promoted to the episcopate. When that happened, ceremonial would have been gradually enriched under due episcopal authority and sanction. For the sake of going fast and attaining within a singlegeneration what ought to have been spread over two or tree, the ritualists loosened the whole fabric of authority in the Church and even to some extent in the State. But matters would only be made much worse if the Dean of St. Paul's and his friends imitate this lawless example. It is far easier to weaken authority than to strengthen it and to provoke disruption than to achieve reunion. The strain on the unity of the Church of England is already considerable ; and if controversy beeamo violent between Churchmen, and passion was suffered to rise, there is great danger that the unity of the Church of England might be broken. This would not serve the cause of Christian unity throughout the world. It would, indeed, most seriously hinder it by destroying the peculiar character of the Church of England, which now makes it a natural mediator between the ancient Churches of the West and East and the Protestant secessions of the Reformation and post-Reformation periods. A purely Protestant Church of England, saturated with what events have taught us to recognize as the dangerous spirit of nationality, would be of very much less value to Christianity and to the hope of Christian unity than is the Church of England as it is to-day. It seems to me that so far as the Dean attacks the Lambeth position his criticism fails. The Lambeth plan may oz may not achieve great results : it at least can do no harm. My own opinion is that, so far as the difficulty arising from the controversy about the Christian ministry and its Orders is concerned, the Lambeth plan is a wise and feasible solution. But I greatly doubt whether we are not exaggerating the importance of that controversy as the only obstacle or the main obstacle which keeps the Christians of Great Britain divided.. I think there are other controversies less easily to be adjusted, which will, upon coming to closer quarters with the matter, be found to stand in the way of complete unity. Nevertheless, the value of the Lambeth proposal remains very great. For it enables us at any rate to ask whether, supposing the diffi- culty about Holy Orders could be got over on some such lines as are suggested at Lambeth, there would remain then any difficulty in the way of reunion ? At the worst the answer to this question would show where we stand.

I fear the answer will be that there is now a. new obstacle based on a new controversy. I fear it will be found that there is spread over a large part of Nonconformity and a small part of the Church of England an opinion which I reckon a most pernicious heresy—the belief that human nature is naturally good ; that all that is necessary for it is a sound system of moral instruction and an environment healthy alike for body, mind, and spirit ; and that in such an environment and under such instruction it will, bit by bit, complete that development which is all that is necessary for its perfection. I am quite sure that all who hold this view must sooner or later drift away from the belief in Redemption and therefore in the Incarnation—beliefs which are not credible except on the basis of a conviction that human nature is naturally corrupt and only to be saved by the supernatural intervention of the Redeemer in human history, the Atonement of the Cross, and the consequent ministration of the Holy Spirit.

It is about this great controversy that men's minds must now be divided. Christian reunion will only be found possible, and indeed is only to be desired, among those who are agreed in holding the older view that humanity is by nature in a state of moral perdition. But in order to ascertain who is on the right side in this new division we need to put aside other disputes. This may, I hope, now be done in respect to disagreement about the Christian ministry. I would have all Christians, and especially the leaders of Free Church opinion, now ask themselves : " Supposing the difficulty about the Christian ministry can be got over on the lines of the Lambeth plan, is there any other obstacle ? In particular, are we all agreed about the moral ruin of mankind and the need of divine atonement and redemption ? " Upon the answer to this question, and not upon the dispute about the ministry, the prospect of Christian reunion, I suggest, really depends.