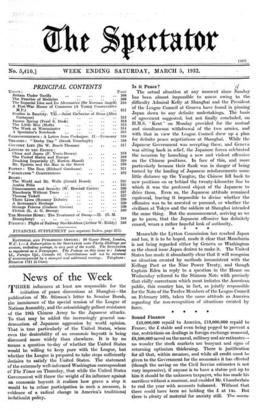 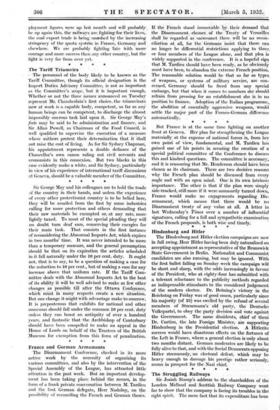 £43,000,000 repaid to America, £18,000,000 repaid to France, the £ stable and even being pegged to prevent a rise, restrictions on dealings in foreign exchange removed, £8,500,000 saved on the naval, military and air estimates— no wonder the stock markets are buoyant and signs of returning optimism thickening. There is justification for all that, within measure, and while all credit must be given to the Government for the economics it has effected (though the saving on the Civil Service estimates is not very impressive), if anyone is to have a statue put up to him it should be the unknown taxpayer, who has made his sacrifices without a murmur, and enabled Mr. Chamberlain to end the year with accounts balanced. Without that there could have been no holding the £ at 14s. But there is plenty of material for anxiety still. The swum- ployment figures, were up last Month and will probably be up again this, the railways are, fighting, for their -lives, the coal export trade is being smashed by the increasing stringency of the quota systein in France, Germany and elsewhere. We are probably fighting Tate kith 'more courage and more success than any other country, but the fight is very far from over yet.