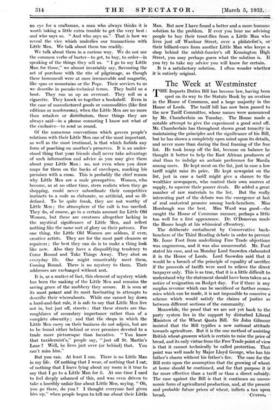 THE Imports Duties Bill-has become law, having been sped on its way to the Statute Book by an ovation in the House of Commons, and a large majority in the House of Lords. The tariff bill has now been passed to the new Tariff Committee, whose names were announced by Mr. Chamberlain on Tuesday. The House made a notable attempt to give the experiment a good send off. Mr. Chamberlain has throughout shown great tenacity in maintaining the principles and the significance of his Bill, but he has shown a completely open mind upon its details, and never more than during the final framing of the free list. He took hemp off the list, because on balance he thought it better to help the East African producers of sisal than to indulge an archaic preference for Manila among users. He kept meat on the list, just in case a‘low tariff might raise its price. He kept newsprint on the list, just in case a tariff might give a chance to the wealthier newspapers, who control their own sources of supply, to squeeze their poorer rivals. He added a great number of raw materials to the list. But the really interesting part of the debate was the emergence at last of real oratorical promise among back-benchers. Miss Horsbrugh was the best. Miss Ward was good—she caught the House of Commons manner, perhaps a little too well for a first appearance. Dr. O'Donovan made the House laugh at his whimsical effrontery.

The deliberate curtailment by Conservative back- benchers of the Third Reading debate in order to prevent Mr. Isaac Foot from underlining Free Trade objections was ungenerous, and it was also unsuccessful. Mr. Foot stated his case, and on Monday Lord Snowden elaborated it in the House of Lords. Lord Snowden said that it would be a breach of the principle of equality of sacrifice if the proceeds of tariffs were used to relieve the direct taxpayer only. This is so true, that it is a little difficult to understand why the statement should have been taken as a notice of resignation on Budget day. For if there is any surplus revenue which can be sacrificed or further econo- mies which can be made, it is not impossible to conceive a scheme which would satisfy the claims of justice as between different sections of the community.

Meanwhile, the proof that we are not yet back to the party system lies in the support by disturbed Liberal Ministers of the Wheat Quota Bill. Sir John Gilmour insisted that the Bill typifies a new national attitude towards agriculture. But it is the one method of assisting British wheat-growers which is certain to raise the price of bread, and its only virtue from the Free Trade point of view is that it cannot technically be called protection. That point was well made by Major Lloyd George, who has -his father's charm without his father's fire. The case for the Bill rests upon the assumption that the growing of wheat at home should be continued, and for that purpose it is far more effective than a tariff or than a direct subsidy The case against the Bill is that it continues an uneco- nomic form of agricultural production, and, at the present and -probable future prices of wheat, inflict S a tax upon