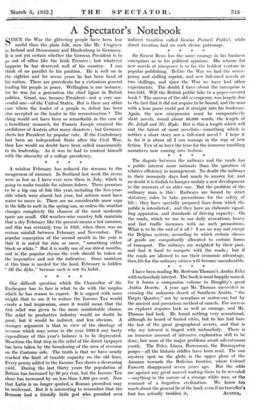 A Spectator's Notebook S INCE the War the glittering people have

been less useful than the plain folk, men like Mr. Cosgrave in Ireland and Stresemann and Hindenburg in Germany. It is not yet certain whether the German President is to go out of office like the Irish Premier ; but whatever happens he has deserved well of his country. I can think Of no parallel to his position. He is well on in the eighties and for seven years he has been head of his nation. There are precedents for a victorious general leading his people in peace. Wellington is one instance, for he was for a generation the chief figure in British politics. Grant, too, became President—not a very suc- cessful one—of the United States. But is there any other case where the leader of a people in defeat has been also accepted as the leader in the reconstruction ? The thing would not have been so remarkable in the case of a hereditary monarch, for Francis Joseph retained the confidence of Austria after many disasters ; but Germany elects her President by popular vote. If the Confederacy had been an independent State after the Civil War, then Lee would no doubt have been called unanimously to its leadership. As it was he had to content himself with the obscurity of a college presidency.

A rainless February has reduced the streams to the meagreness Of summer. In Scotland last week the rivers were as low as I have ever seen them in July, which is going to make trouble for salmon fishers. There promises to be a big run of fish this year, including the five-year- olds which were absent last year, but salmon must have water to move in. There are no considerable snow caps in the hills to melt in the spring sun, so unless the weather changes completely the chances of the most moderate spate are small. Old weather-wise country folk maintain that a dry February like the present means a hot summer, and this was certainly true in 1921, when there was no serious rainfall between February and November. The popular conception of the second month in the year is that it is noted for rain or snow, "something either black or white." But it is really one of our driest months, and in the popular rhyme the verb should be taken as the imperative and not the indicative. Since moisture at this time is needed for the land, February is bidden "fill the dyke," because such is not its habit.

One difficult question which the Chancellor of the Exchequer has to face is what to do with the surplus which he has reason to expect. It is argued with some weight that to use it to reduce the Income Tax would create a bad impression, since it would mean that the first relief was given to the more comfortable classes. The relief to productive industry would no doubt be great, but it would be indirect, and less obvious. A stronger argument is that in view of the shortage of revenue which may occur in the year 1932-3 any hasty expenditure of this year's balance is to be deprecated. Meantime-the first step in the relief of the direct taxpayer has been taken by the broadening of the area of revenue on the Customs side. The truth is that we have nearly reached the limit of taxable capacity on the old lines. Every, penny added to the Income Tax shows a decreasing yield. During the last thirty years the population of Britain has increased by 80 per Cent, but the Income Tax alone,has increased by no less than 1,300 per cent. Now that Latin is no longer quoted, a Roman precedent may be irrelevant. But it is interesting to remember that the Romans had a friendly little god who presided over indirect taxation called Genius Portorii Publiei, while direct taxation had no such divine patronage.

Sir Ernest Benn has the same courage in his business enterprises as in his political opinions. His scheme for new novels at ninepence is so far the boldest venture in popular publishing. -Before the War we had the seven- penny and shilling reprint, and new full-sized novels at two shillings, and since the War we have had other experiments. The doubt I have about the enterprise is two-fold. Will the British public take to a paper-covered book ? The success of the old sevenpenny was largely due to the feet that it did not require to be bound, and the man with a lean purse could put it straight into his bookcase. Again, the new ninepennies must be comparatively short novels, round about 40,000 words, the length of Dr. Jekyll and Mr. Hyde. But is this a length which will suit the talent of most novelists—something which is neither a short story nor a full-sized novel ? I hope it is, for it is about all I can manage in the way of new fiction. Few of us have the time for the immense rambling narratives now coming into fashion.

The dispute between the railways and the roads has a public interest more intimate than the question of relative efficiency in management. No doubt the railways in their monopoly days had much to answer for, and no doubt it is foolish to hamper unduly a new development in the interests of an older one. But the problem of the ordinary man is this : Railways are bound by strict statutory rules to take precautions for the safety of life ; they have specially prepared lines from which the public is interdicted ; and they have an elaborate signal- ling apparatus, and standards of driving capacity. On the roads, which we use in our daily avocations, heavy and fast traffic increases with no such precautions. What is to be the end of it all ? I see no way out except the Belgian system, according to which certain classes of goods are compulsorily allocated to certain forms of transport. The railways are weighted by their past, and find it hard to compete with the roads ; but if the roads are 'allowed to use their economic advantage, then life for the ordinary citizen will become unendurable.

I have been reading Mr. Bertram Thomas's Arabia Felix with melancholy interest. The book is most happily named, for it forms a companion volume to Doughty's great Arabia Deserta. A year ago Mr. Thomas succeeded in crossing the unknown desert of Southern Arabia, "the Empty Quarter," not by aeroplane or motor-car, but by the ancient and precarious method of camels. For success an explorer requires luck as well as courage, and Mr. Thomas had luck. He found nothing very sensational, although he heard of buried cities, but he has laid bare the last of the great geographical secrets, and that is why my interest is tinged with melancholy. There is an immense amount of intensive exploration still to be done, but none of the major problems await adventurous youth. The Poles, Lhasa, Ruwenzori, the Bramaputra gorges—all the historic riddles have been read. The one mystery spot on the globe is the upper glens of the Amazon towards the Bolivian frontier, where Colonel Fawcett disappeared seven years ago. But the odds are against any great marvel waiting there to be revealed —anything in the nature of a strange white race, or the remnant of a forgotten civilization. We know too much about the general lie of the land, even if no traveller's.

foot has actually trodden it, AusrEx.,