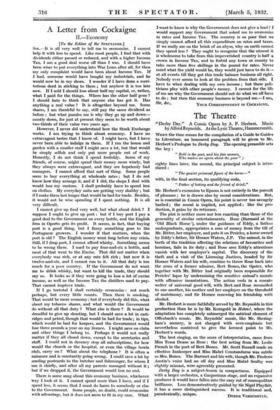 A Letter from Cockaigne II.—Economy [To the Editor of the

SIR,-It is all very well to tell me to economize. I cannot help it with less to spend. Like most people, I find that with dividends either passed or reduced, and with a higher Income Tax, I am a good deal worse off than I was. I should have been wiser to put everything into War Loan after all, for then my only complaint would have been about Income Tax. If I had, someone would have bought my industrials, and he would now be in my shoes. I wonder if I have done a meri- torious deed in sticking to them ; but anyhow it is too late now. If I sold I should lose about half my capital, or, rather, what I paid for the things. Where has the other half gone ? I should hate to think that anyone else has got it. Has anything a real value ? It is altogether beyond me. Some shares, I am thankful to say, still pay the same dividend as before ; but what puzzles me is why they go up and down— mostly down, for just at present they seem to be worth about two-thirds of their value two years ago.

However, I never did understand how the Stock Exchange works. I am trying to think about economy. I have no extravagant tastes that I know of. I might have, but I have never been able to indulge in them. If I ran the house and garden with a smaller staff I might save a lot, but that would be simply selfish and only put more people out of work. Honestly, I do not think I spend foolishly. Some of my friends, of course, might spend their money more wisely, but they always were extravagant, and they are hopelessly bad managers. I cannot afford that sort of thing. Some people seem to buy everything at wholesale rates ; but I do not know how they arrange it, and if I did, the shops I deal with would lose my custom. I shall probably have to spend less on clothes. My everyday suits are getting very shabby ; but if I make them last longer that would be bad for trade. Besides, it would not be wise spending if I spent nothing. It is all very difficult.

I cannot give up food very well, but what about drink? I suppose I ought to give up port : but if I buy port I pay a good deal to the Government on every bottle, and the English firm in Oporto gets its profit. It seems, in fact, that buying port is a good thing, but I fancy something goes to the Portuguese growers. I wonder if that matters, when the port is old ? The English money went long before any crisis. Still, if I drop port, I cannot afford whisky. Something seems to be wrong there. I used to pay four-and-six a bottle, and most of that went to the Excise. That did not matter when everybody was rich, or at any rate felt rich ; but now it is twelve-and-six, and I cannot run to it. All that duty is too much for a poor country. If the Government do not want me to drink whisky, but want to kill the trade, they should say so. It looks as if they were going to lose a lot of excise income, as well as the Income Tax the distillers used to pay. That cannot improve trade.

If I go teetotal I shall certainly economize : not much perhaps, but every little counts. Then there is smoking. That would be more economy; but if everybody did this, what about my tobacco shares, and what would the Government do without all that duty ? What else is there ? It would be dreadful to give up shooting, but I should save a lot in cart- ridges and petrol, though that would be bad for trade; in tips, which would be had for keepers, and the Government would lose three pounds a year on my licence. I might save on clubs and other things I belong to. Perhaps it would not really matter if they all closed down, except to the secretaries and staff. I could not in decency stop all subscriptions, for how would the church or the hospital, or even the village bowls club, carry on ? What about the telephone ? It is often a nuisance and is constantly going wrong. I could save a lot by sending postcards to the butcher and fishmonger, for whom I use it chiefly, and after all my parents managed without it ; but if we dropped it, the Government would lose no end.

There is some snag about this economy business, whichever way I look at it. I cannot spend more than I have, and if I spend less, it seems that I must do harm to somebody or else to the Government. Some people, no doubt, could economize with advantage, but it does not seem to fit in my case. What

I want to know is why the Government does not give a lead ? would support any Government that asked me to economize in rates and Income Tax. The country is so poor that we simply cannot afford all this expenditure on rates and taxes. If we really are on the brink of an abyss, why on earth cannot they spend less ? They ought to recognize that the utmost it it wholesome to take from this impoverished country is half a crown in Income -Tax, and to forbid any town or county to take more than five shillings in the pound • for rates. Never mind what the yield would be, they would just have to do it-- at all events till they got this trade balance business all right. Nobody ever seems to look at the problem from that side. I have to when dealing with my own income ; but these poli- ticians play with other people's money. I cannot for the life of me see why the Government should not chi what we all have to do ; but then this economy business is beyond me.—I am, Sir, .te.,