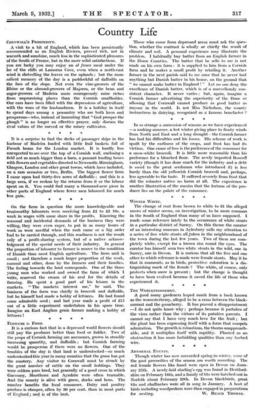 , It is a curious fact that in a depressed world flowers should still pay the producer better than food or fodder. Two of the props of Cornish farming are anemones, grown in steadily increasing quantity, and daffodils ; but Cornish farming would be prosperous if there were no flowers. One of the troubles of the day is that land is understocked—so much urwlerstocked this year in many counties that the grass has got the mastery. Any visitor to Cornwall must be struck by the great number of cattle on the small holdings. They were seldom pure bred, but generally of a good cross in which • Guernsey,. Shorthorn and Ayrshire were often traceable. And the county is alive 'with geese, ducks and liens. The number benefits the local consumer. Dairy and poultry • Produce is cheaper, often by 30 per cent, than in most parts of England.; and is of the best.