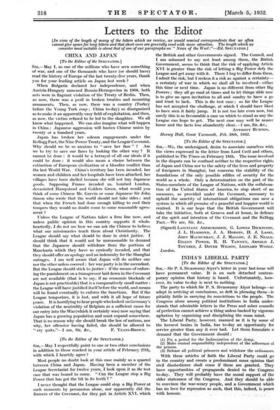 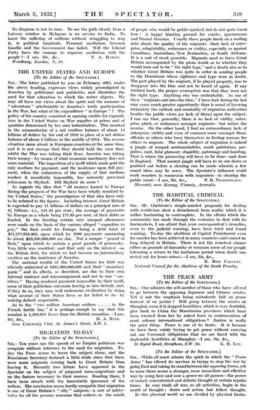 [To the Editor of the SPECTATOR.] SIR,—Sir P. S. Sivaswamy Aiyer's letter in your last issue will have permanent value. It is on such detached "contem- porary opinion that history is based. Unfortunately, how-

ever, its value to-day is next to nothing. - The party to which Sir P. S. Sivaswamy Aiyer belongs—so adept in arriving at conclusions, so deft in phrasing them—is pitiably futile in carrying its convictions to the people. The Congress alone among political institutions in India under- stands that admirable letters in the Press and sober councils of perfection cannot achieve a thing unless backed by vigorous agitation by organizing and disciplining the mass mind.

The Liberal Party, however, manned as it is by some of the keenest brains in India, has to-day an opportunity for service greater than any it ever had. Let them formulate a demand that the Government • should : - (1) Fix a period for the Indianization of the Army. - (2) Make central responsibility independent of the adherence ol the princes. • (3) Release all political prisoners and withdraw the ordinances.

With these articles of faith the Liberal Party could go to the country and create a predominant mass _opinion tbat civil disobedience shall cease if these are granted. They have opportunities of propaganda denied to the Congress to-day. They will probably have the moral support, of the elder statesmen of the Congress. And they should be able to convince the war-weary people, and a Government which has no., love for repression as such, that this, indeed, is peace with honour. To diagnose is not to cure. To see the path clearly from a balcony window in Mylapore is no -service • to - India. To know the suffering of millions without struggling to stop it, is political turpitude. Personal mediation between Gandhi and the Government has failed. Will the Liberal Party have the courage to organize mediation with the