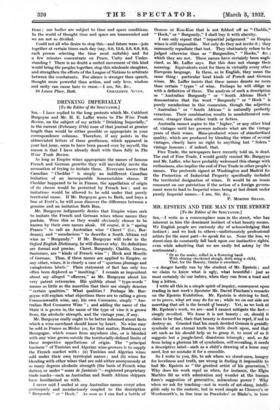 . [To the Editor of the SPECTATOR.] have replied to the long protests which Mr. Cuthbert Burgoyne and Mr. H. E. Laffer wrote to The Wine Trade Review, on subject of my article " Drinking Imperially," in the current (February 27th) issue of that journal at greater length than would be either possible or appropriate in your correspondence columns. Therefore, if any points in the abbreviated letters of these gentlemen, which appeared in your last .issue, seem to have been passed over by myself, the reason is that I have already dealt with them fully in The Wine Trade Review.

As long as Empire wines appropriate the names of famous French and German growths they will inevitably invite the accusation of trying to imitate them. Everyone knows that Canadian " Cheddar " is simply an indifferent Canadian imitation of an incomparable Somersetshire cheese. If Cheddar happened to be in France, the appellation of origin of its cheese would be protected by French law ; and no imitations would be allowed to be sold under that purely territorial name. If Mr. Burgoyne goes to Bath, and buys a bun at Fortt's, he will soon discover the difference between a genuine and an imitation Bath Bun.

Mr. Burgoyne indignantly denies that Empire wines seek to imitate the French and German wines whose names they purloin. Were this so they would obviously choose to be known by their own names alone. Of course, it is" apeing France" to call an Australian wine " Claret " (i.e., Bor- deaux), and " mendacious " to describe a South African red wine as "Burgundy." If Mr. Burgoyne will refer to the Oxford English Dictionary, he will discover why. Its definitions are formal and precise. Claret, Burgundy, Chablis, Graves, Sauternes, are "kinds of French wine " ; Hock and Moselle of German. Thus, if these names are applied to Empire, or any other, wines, it is clearly a case of" spurious plumage and vainglorious labels." Plain statement of fact has only too often been deplored as "insulting." I remain as impenitent about my alleged " offences," as Mr. Burgoyne about his very patent reticencies. His quibble about "type-words" means as little as the assertion that their use simply denotes "certain qualities." What qualities ? Perhaps Mr. Bur- goyne will explain what objections there are to calling a-given Commonwealth wine, say, his own Coomaree, simply " Aus- tralian Red Coomaree Wine"; and adding the name of the State it is grown in, the name of the type of vine it is grown from, the alcoholic strength, and the vintage year, if any.

Mr. Burgoyne really ought to be better informed about facts which a wine-merchant should know by'lleart. No wine may be sold in France as Medoc (or, for that matter, Bordeaux) or Bourgogne, which comes from anywhere else, or is blended with any wine grown outside the territorially-defined limits of these respective appellations of origin. The "principal business" of Tunisian and Algerian wine-growers is to supply the French market with : (a) Tunisian and Algerian wines sold under their own territorial names; and (b) wines for blending with other wines that are sold either anonymously at so many degrees alcoholic strength (the basis of French wine duties), or under " now de fantaisie "—registered proprietary trade marks—such as Australian and South African shippers

have familiarized us with.. .

I never said I smiled at any Australian names except when grotesquely and mendaciously coupled to the description " Burgundy " or "Hock." As soon as I can find a bottle of

Oomoo or Koo-Koo that is not fobbed off as "Chablis," " Hoek," or " Burgundy,'? I shall buy it with alacrity.

I can only repeat that "impartial judgement" on Empire wines is still impossible. Not only do they not invite it ; they summarily repudiate that test. They obstinately refuse to be judged otherwise than as "Burgundies," "Hocks," &e. ; which they are not. These names have certainly been angli- cized, as Mr. Laffer says. But this does not change their meaning. Equivalents exist for them in virtually every other European language. In them, as in English, they mean the same thing; particular local kinds of French and, German wines. Mr. Laffer insists that these names denote no more than certain" types" of wine. Perhaps he will oblige us with a definition of them. The analysis of such a description as "Australian Burgundy" or "South African Hock demonstrates that the word " Burgundy " or " Hoek " is purely mendacious in this connexion, though the adjective " Australian " or "South African" is naturally perfectly veracious. Their combination results in unadulterated non. sense, stranger than either truth or fiction.

Australia cannot aspire to the "higher," or any other kind of, vintages until her growers indicate what are the vintage years of their wines. Mass-produced wines of standardized quality, which are produced by blending the wines of several vintages, clearly have no right to anything but " Solera vintage honours ; if indeed, that.

Free Trade, the newspapers have recently told us, is dead. The end of Free Trade, I would gently remind Mr. Burgoyne and Mr. Laffer, who have probably welcomed this change with enthusiasm, also implies the end of Free Trade in other people's names. The protocols signed at Washington and Madrid for the Protection of Industrial Property specifically included the territorial designation of wines. It would be an ironic comment on our patriotism if the action of a foreign govern- ment were to lead to Imperial wines being at last drunk under purely Imperial names.—! am, Sir, &c., P. MORTON SHAND.