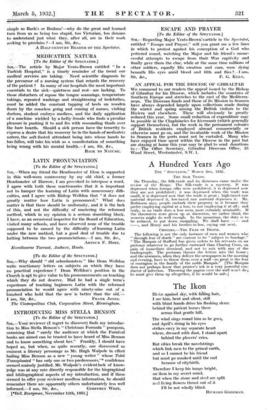 the Editor of the SPECTATOR.] Sta,—Regarding Major Yeats-Brown's article in the Spectator, entitled "Escape and Prayer," will you grant me a few lines in which to protest against his conception of a God who pottered round, watching the Major and his friend's unsuc- cessful attempts to escape from their War captivity and finally gave them the clue, while at the same time millions of other soldiers, equally pis creation and care, were dying beneath His eyes amid blood and filth and flies ?—I am,