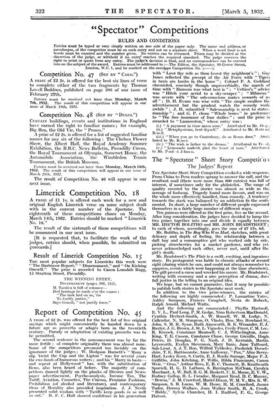 'C Spectator" Competitions RULES AND CONDITIONS Entries must be typed

or very clearly written on one side of the paper only. The name and address, or pseudonym, of the competitor must be on each entry and not on a separate sheet. When a word limit is set words must be counted and the number given. No entries can be returned. Prizes may ho divided _at tho .-discretion of the judge, or withheld if no entry '', reaches the required standard. The judge reserves the right. to Print or quote from any entry. ,The -judge's decision is final, and no correspondence can be entered into on the subject of the award. Entries must be addressed to :—The Editor, the Spectator, 99 Gower Street,

Competition No. 47 (SET BY "CARD.") A PRIZE of 12 2s. is offered for the best six lines of verse to complete either of the two fragments by. Thomas Lovell Beddoes, publishdd on page 286 of our issue of February 27th.

Entries must be received not later than Monday, Match 7th, 1932. The result of this competition will appear in our issue of March /9th, 1932.

Competition No. 48 (SET BY " DUGLI.") CERTAIN buildings, events and institutions in England have earned the right to familiar names ; for example,

Big Ben, the Old Vic, the "Proms." - A prize of £2 2s. is offered for a list of suggested familiar names for any six of the following : The Chelsea Flower Show, the Albert Hall, the Royal Academy Summer Exhibition, the B.B.C. News Bulletin, Piccadilly Circus, the Royal Tournament at Olympia, Somerset House, the Automobile Association, the _Wimbledon Tennis Tournament, the British Museum.

Entries must be received not later than Monday, March 14th, 1932. The result of this competition will appear in our issue of March 26th, 1932.

The result of Competition No. 46 will appear in our next issue:

Limerick Competition No. 18 A 111.12B of XI Is. is offered each week for a new and original English Limerick verse on some subject dealt with in the current number of the Spectator. The eighteenth of these competitions closes on Monday, March 14th; 1932. Entries should be marked "Limerick

The result of the sixteenth of these competitions will be announced in our next issue.

[It is requested that, to facilitate the work of the judges entries should, when possible, be submitted on postcards.] Result of Limerick Competition No. 15 THE most popular subjects for Limericks this week were "The Dartmoor Report,"" Disarmament," and "On Kicking Oneself." The prize is awarded to Canon Lonsdak Bagg, 15 Stratton Street, Piccadilly.

M. Tardieu is full of resource— Reel herrings he trails o'er the RCRITSO "The task laid on us, 'tis

Report of Competition No. 45 A PRIZE of £.2 2s. was offered for the best list of five original sayings which might conveniently be handed down to a future age as proverbs or adages born in the twentieth century. Parody or adaptation of existing proverbs was to be permitted.

The second sentence in the announcement was by far the more fertile_ ; of complete originality there was almost none. Some of the competitors presumed too lavishly on the ignorance of the judges ; W. Hodgson Burnett's Many a slip 'twixt the Cup and the Lipton" was for several years the ewe-lamb of humorous writers; and his" Marry in haste— and repent at Hollywood" has, with the substitution of Reno, also been heard of before. The majority of com- petitors danced lightly on the planks of Divorce and News- paper advertisement. Psycho-analysis, Income Tax, The Tariff, Aviation, Cosmetics, The Cinema, Feminine Fashions, Prohibition (of alcohol and literature), and contemporary ideas of Morality also provided inspiration. J. J. Nevin presented solid wisdom with Tariffs keep goods in as well as out." II. F. C. Hull showed confidence in his generation With "Love thy wife as thou lovest thy neighbour's" ; • Guy Innes reflected the precept of the Air Force with "Tigers in taxis are lanibS in the home " ; Colcinel F. A. Goddard chronicled, concisely though unpmverbially, the march of time with "Ransom was what taxi is " ; •• Celtico's " advice was "Hitch your aerial to a sky-scraper " ; " Hibiscus " was severe with "The sub-conscious makes cowards of Us all " ; D. II. Evans was wise with "The simple swallow the advertisement but the prudent watch the remedy work awhile " ; J. H. 'submitted "Salesmanship is next to states- manship " • and G. P. chose "Whole bones" in preference to "The free insurance of four dailies " ; and the prize is awarded to "Launceston," whose entry was : xi.) "A payment in'time saves nine." Attributed to Mr. Dr-g...

THE Spectator Short Story Competition evoked a wide response. From China to Peru readers sprang to answer the call, and the resultant mail (there were more than 800 entries) was full of interest, if sometimes only for the philatelist. The .range of' quality covered by the stories was almost as wide as the, acreage of foolscap. Tragedy found more favour, and was on the whole more effectively handled, than comedy. A tendency, towards the stark was balanced by an addiction to the senti- mental. In short, a large number of different people expressed; themselves in a fairly large number of different ways. - Ten guineas were offered as the first prize, five as the second.. After long consideration, the judges have decided to lump the two prizes together into one and divide it equally bete-mil MR. HECTOR BOLITHO and MR. JOHN BRADSTREET ; to each of whom, accordingly, goes the sum of 27 -us. fid.

Mr. Bolitho, in The Boy Who Was Mad, sketches, with great - delicacy and depth of feeling, the relationship between a: daft boy and a consumptive girl who worked side by side, picking strawberries for a market gardener, and who yet never acknowledged each other, never met, until after the

Mr. Bradstreet's The Flair is a swift, exciting, and, ingenious story. Its protagonist was liable to chronic ettaCks: of second! sight (during which he saw, and could not always remember to, suppress, events which were happening at the time elsewhere).. The gift proved a curse and wrecked his career. Mr. Bradstreet, , writing with economy and a nice perception of drama, does' full justice in the telling to an original idea.

We hope, but we cannot guarantee, that it may be possible, to publish both stories in the -Spectator next week.