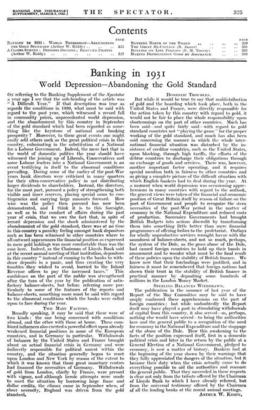 ON referring_ to the Banking Supplement of the Spectator a year ago I see that the sub-heading of the article was "A Difficult Year." If that description: was true as regards the conditions in 1990, what must be said with regard to the past year, which witnessed a record fall in commodity prices, . unprecedented world depression, and the abandonment by this country in September of the gold standard which had been regarded as some- thing like the keystone of national and banking prosperity ? _ Moreover, to these great events one might easily add others such as the great political crisis in this country, culminating in the substitution of a National for a Labour Government. Indeed, the mere fact that in the world of domestic polities the year should have -witnessed the joining up of Liberals, Conservatives and some Labour leaders into a National Government is an event testifying in itself to the abnormal conditions prevailing. During some of the earlier of the post-War years bank directors were criticized in many quarters for their ultra-conservative policy in not distributing larger dividends to shareholders. Instead, the directors, for the most part, pursued a policy of strengthening both visible and inner reserves, placing special sums to con- tingencies and carrying large amounts forwarcl. Row wise was the policy then pursued has now been demonstrated, and I think it is to this foresight, as well as to the conduct of affairs during the past year of crisis, that we owe the fact that, in spite of record depression and the shock administered by the abandonment of the gold standard, there was at no time in this country a panicky feeling amongst bank depositors such as has been witnessed in other countries where to all outward appearances the financial position as expressed in mere gold holdingS was more comfortable than was the case here. Indeed, as the Chairman of Lloyds Bank said at the recent annual meeting of that institution, depositors in this country" instead of running to the banks to with- draw deposits in a panic, and thus creating the very troubles, they wished to avoid, hurried to the Inland Revenue offices to pay the increased ; taxes." This confidence on the part of the public was strengthened after, the turn of the year by the publication of satis- factory balance-sheets, but before referring more par- tieularlY to some of the features of the reports and balance-sheets, something more must be said with regard to the abnormal conditions which the banks were called ;upon to face during the year.

; Broadly speaking, it may be said that these were of two kinds : the one being concerned with conditions ;abroad, and the other with those at home. These com- bined influences also exerted a powerful effect upon already weakened financial positions in some of the European ;countries, and in Germany in particular. Withdrawals ;of balances by the United States and France brought :about an actual financial crisis in Germany and were indirectly responsible for political unrest within the country, and the situation generally began to react upon London and New York by reason of the extent to which it was' known that those great monetary centres had financed the necessities of Germany. Withdrawals of gold from London, chiefly by France, were pressed with vigour, and although heroic attempts were made to meet the situation by borrowing large franc and ; dollar credits, the climax came in September when, of !sheer necessity, England was driven from the gold 'standard.

But while it would be true to say that maldistribution of gold and the hoarding which took place, both in the United States and France, were directly responsible for the action taken by this country with regard to gold, it would not be fair to place the whole responsibility 11p011 shortcontings on the part of other countries. Much has been said—and quite fairly said—with regard to gold standard countries not "playing the game" for the proper working of the gold standard, and much has also been said concerning the manner in which the whole inter- national financial situation was disturbed by the in- sistence of creditor countries, such as the United States, upon blocking, through high tariffs, the efforts of the debtor countries to discharge their obligations through an exchange of goods and services. There was, however, another important factor operating, and it requires special mention both in fairness to other countries and as giving a complete picture of the difficult situation with which English bankers had to deal during the year. At a moment when world depression was occasioning appre- hensions in many countries with regard to the outlook, the gravest views were taken of the financial and economic position of Great Britain itself by reason of failure on the part of Government and people to recognize the stern necessities of the post-War period in the matter of economy in the National Expenditure and reduced costs of production. Successive Governments had brought British Budgets into serious discredit by transforming them into something little better than mere financial programmes of offering bribes to the proletariat. Outlays for wholly unproductive services wrought havoc with the soundness of balance-sheets, and not so much, perhaps, the system of the Dole, as the gloss abuse of the Dole, had caused foreign countries to hold up their hands in amazement and to wonder what must be the final result of these policies upon the stability of British finance. We know now that their forebodings were justified, and in fairness it must be remembered that foreign nations had shown their trust in the -stability of. Rritisli finance in practical manner by depositing some hundreds of millions in the London Money Market.

The publication in the summer of last year of the Report of the May Committee may be said to have amply confirmed these apprehensions on the part of foreign countries ; but while undoubtedly the Report itself may have played a part in stimulating withdrawals of capital from this country, it also served—as, perhaps, nothing else would have served—to bring the authorities here and the general public to a recognition of the need for economy in the National Expenditure and the stoppage of the abuse of the Dole. Row this awakening to the facts of the position expressed itself, first in a domestic political crisis and later in the return by the public at a General Election of a National Government, pledged to economy, is now a matter of history. Bankers had at the beginning of the year shown by their warnings that they fully appreciated the dangers of the situation, but it became their duty when the crisis actually came to do everything possible to aid the authorities and reassure the general public. That they succeeded in these respects is clear not only from the tribute offered by the Chairman of Lloyds Bank to which I .hav.e already referred, but from the universal testimony offered by the Chairmen of all the leading banks at the recent annual meetings.