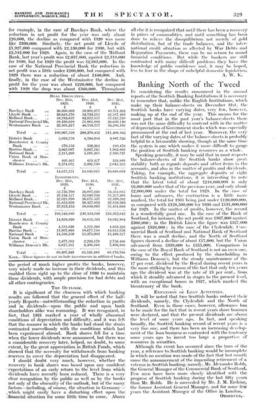 Banking North of the Tweed

IN considering the results announced in the annual reports of the Scottish Banking Institutions it is necessary to remember that, unlike the English Institutions, which make up their balance-sheets on December 31st, the Scottish banks have varying dates, very few, however, making up at the end of the year. This means for the most part that in the past year's balance-sheets there was not the sante difficulty to contend with in the matter of depreciation of Government stocks which was especially pronounced at the end of last year. Moreover, the very fact of the varying dates of the balance-sheets is probably helpful to a favourable showing, though at the SallIC time • the system is one which makes it more difficult to gauge the position of Scottish banking resources as a whole. - Speaking generally, it may be said Bad; in most respects the balance-sheets of the Scottish banks show great stability both as regards deposits and other items in the accounts, and also in the matter of profits and dividends. Taking, for example, the aggregate deposits of eight Scottish banking institutions, it is interesting to note that the latest total of about ;£248,000,000 is only , £6,000,000 under that of the previous year, and only about S:2,000,000 under the total for 1929. In the ease of loans and advances, the contraction is a little more marked, the total for 1931 being just under £120,000,000, as compared with £128,500,000 for 1930 and £131,000,000 for 1929; In the Matter of profits, however, the record is a wonderfully good one. In the case of the Bank of Scotland, for instance, the net profit was £367,000 against £366,000; in the British Linen the figure was £327,000 against £326,000; in the case of the Clydesdale, Com- mercial Bank of Scotland and National Bank of Scotland there was a small decline, and the North • of Scotland figures showed a decline of about £17,000, but the Union advanced from £339,000 to £355,000. Comparison in the ease of the Royal Bank of Scotland is not an even one, owing to the effect produced by the shareholding in Williams Deacon's, but the steady maintenance of the 17 per cent, dividend by the Royal during recent years is the more striking by reason of the fact that only ten years ago the dividend was at the rate of 13 per cent., front which it steadily advanced in stages to the present level, with an exceptional bonus in 1927, which marked the bicentenary of the bank. . .

It will be noted that two Scottish banks reduced their dividends, namely, the Clydesdale and the North of Scotland.- Even in those cases, however, allowance has to be made for the fact that in recent years share bonuses were declared, and that the present dividends are above the level of some years ago. In fact, and speaking broadly, the Scottish banking record of recent years is a very fine one; and there has been an increasing develop- ment of the loan business as contrasted with the tendency sonic years' ago to invest too large a proportion of resources in sedurities.

Although the event has occurred since the turn of the year, a reference to Scottish banking would be incomplete in which no mention was made-of the fact that last month came the announcement of the impending retirement of a veteran in Scottish banking, namely, Mr. Alexander If the General Manager of the Commercial Bank of Scotland: Few men have 'been more closely identified with the progress of Scottish banking 'during the last fifty years than Mr. Robb. He is succeeded by Mr. J. M. Erskine, the former Assistant General Manager, and for some few years the Assistant Manager of the Office in London.