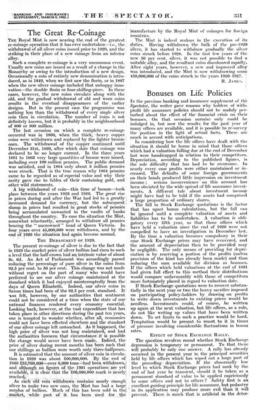 Tap Royal Mint is now 'nearing the end of the greatest re-coinage operation that it has ever' nndertaken—i.e., the , withdrawal of all silver coins issued prior to 1920, and the striking in their place of a new Coinage from an inferior alloy.

Such a complete re-coinage is a very uncommon event. Usually new coins are issued as a result of a change in the Monarchy or owing to the introduction of a: new design. Occasionally a coin of entirely new denomination is intro- duced, as in 1849, when we first saw the florffi, or in 1887 when the new silver coinage included that unhappy inno- vation—the double florin or four-shilling-piece. In these cases, however, the new coins circulate along with the old, and the gradual withdrawal of old and worn coins results in the eventual disappearance of the earlier designs. But in the present case the programme was nothing less than the withdrawal of every single silver coin then in circulation. 'The number of coins is not definitely known, but it is probably in the neighbourhood of 800 or 900 million.

The last occasion on which a complete re-coinage occurred was in '1860, When the thick, -heavy copper coins were withdrawn and replaced by the lighter bronze; ones. The withdrawal of the copper continued until December 31st, 1869, after which date that coinage was declared to be no longer current. In the three years 1861 to 1868 very large quantities of bronze were issued, including over 100 million pennies. The public demand was satisfied, and in 1864 only about 8 million pennies were struck. That is the true reason why 1864 pennies came to be regarded as of especial value and why their rarity gave rise to fables of their containing gold, and other wild statements.

A big withdrawal of coin—this time of bronze—took place between the years 1928 and 1926. The great rise in prices during and after the War had led to a greatly increased demand for currency, but the subsequent slump in prices had resulted in great stocks of pennies being accumulated unwanted in the vaults of banks throughout the country. To ease the situation the Mint, somewhat reluctantly, arranged to withdraw all pennies' bearing the " uncrowned " head of Queen Victoria. In four years-over, 45,000,000 were withdrawn, and by the end of 1926 the situation had again become normal.

The present re-coinage of silver is due to the fact that in 1920 the market price of silver bullion had risen to such a level that the half-crown had an intrinsic value of about 8s. 6d. An Act of Parliament Was accordingly passed reducing the percentage of pure silver in the coins from 92.5 per cent. to 50 per cent. Thismhange was not made without regret on the part of many who would have preferred to see our silver coinage maintained at the standard which it had enjoyed uninterruptedly from the days of Queen Elizabeth. Indeed, Our silver coins in Saxon times had been of the 92.5 per cent. standard. It

as felt, however, by our authorities that sentiment could not be considered at a time when the state of our. national finances rendered every economy essential. Looking back, however, at the vast expenditure that has taken place in other directions during the past ten years, one is tempted to wonder whether, after all, economies could not have been effected elsewhere and the standard of our silver coinage left untouched. As it happened, the high price of silver was not long maintained, and had the authorities foreseen that circumstance it' is possible the change would never have been made. Indeed, the price of silver during recent months has been such that our shillings as bullion were worth only three-halfpence.

As each old coin •WithdraWn contains nearly enough, silver to make two new ones, the Mint has had a large' surplus of bullion. Much of this has been sold in the __.inarket, while part ot it has been Used for _ the

inanufacture by the "Royal Mint' of Coinages for foreign Countries.

: The Mint is indeed zealots in the execution of its -duties. Having withdrawn, the bulk of the pre-1920 Silver, it has started to withdraw gradually the silver Coins struck before 1928. In the first few years of thc new 50 per cent, silver, it was not possible to find a suitable alloy, and the resultant coins discoloured rapidly,. After eight years, however, a new and improved alloy was introduced, and the Mint is now withdrawing some 450,000;000 of the coins' struck in the years 1920-1927.