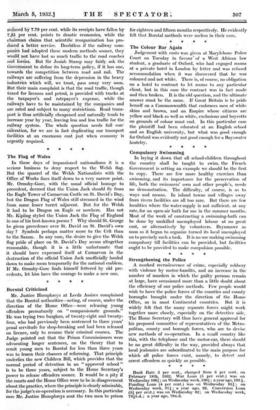 Page 3, 5 March 1932 — ,Judgement with costs was given at Marylebone . Poliee Court on
Close

,Judgement with costs was given at Marylebone . Poliee Court on

Tuesday in favour' of a West African law student, a graduate of Oxford, who had engaged rooms at a private hotel in London by letter and was refused accommodation when it was discovered that he was coloured and not white. There is, of course, no obligation on a hotel to contract to let rooms to any particular client, but in this case the contract was in fact made and then broken. It is the old question, and the ultimate answer, must be ihe same. If Great Britain is to pride herself on a Commonwealth that embraces men of white skins and brown, and an Empire whuse citizens are yellow and black as well as white, exclusions and boycotts on grounds of colour must end. In this particular case the plaintiff had been educated at an English school and an English university, but what was good enough for Oxford was evidently not good enough for a Bayswater