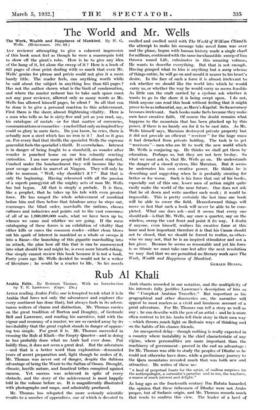 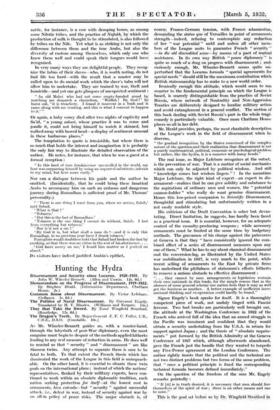 Arabia Felix. . By Bertram. Thomas., With an lid...mina:ion

Avenue reading Arabia,Feli.e, one is tempted to ask what it is in Arabia that lures -not only the adventurer and explorer (for every continent has done that), but always finds in its adven- turers writers of charm and distinction. Mr. Thomas carries on the great tradition of Burton and Doughty, of Gertrude' Bell and Lawrence, and reading his narrative, told with the vigour and economy of a master, we are so carried away by its inevitability that the great exploit.stand.s in danger of appear.' Mg too simple. For great it is. Mr. Thomas succeeded- in crossing the Rub at Khali—the Empty Quarter—and in doing' so has probably done what no Arab had ever done. Put' baldlythus, it does not seem a great deal. But the adventure —and that is a better word than exploration—demanded years of secret preparation and, light though he makes of it, Mr. Thomas was never out of danger, deSpite the dubious advantage of being the Wazir to the Sultan of Oman. Drought, climate, hostile nature, and fanatical tribes conspired against success. Yet success was achieved in spite of every obstacle, and the story of the achievement is most happily told in the volume before us. It is magnificently illustrated with photographs and maps, and admirably- produced.

Mr. Thomas has relegated the more seriously scientific results to a number of appendices, One Of Which is devoted to

Arab chants recorded in our notation, and the multiplicity of his interests fully justifies Lawrence's description of him as the " •Coinpleat Arabian Traveller." But important as his geographical and . other discoveries are, the narrative will appeal to most readers as a vivid and luminous account of a great adventure. For Mr. Thomas can tell a story as well as any : he can describe with the pen of an artist : and he is Mare often content to let his Arabs tell their story in their own way throws_much light on Bedouin ways of thinking and an the habits or his chance friends.

An unexpected delay—though nothing is really expected in a country where instability is the chief characteristic of any rikime, where personalities are more important. than the machinery of government—proved in the end an advantage : for Mr. Thomas was able to study the peoples of Dhufar as he could not otherwise have done, while a preliminary journey to the Qara mountains revealed much that was both new and attractive. He writes of these as :

" a land of perpetual feasts for the artist, of endless surprises for the anthropologist, a naturalist's paradise and to me,. the wayfarer, a source of much interest and delight."

As long ago as the fourteenth century Ibu Batuta hazarded the opinion that these tribesmen of Dhufar were not Arabs proper, but of Sudanie origin, and Mr. Thomas records much that tenda to confirm this view. The leader of a herd of

cattle, for instance, is a cow with drooping horns, as among some Nilotic tribes, and the practice of Nafakh, by which the production of rqpic is thought.to be stimulated, is also followed by tribes on the Nile. Yet what is as striking is not only the difference between them and the true Arabs, but also the diversity of, custom among themselves, which only one who, knew them well and could speak their tongues would have recognized.

In very many ways they are delightful people. They recog- nize the tabus of their staves—who, it is worth noting, do not find life too hard—with the result that a master may be called upon. to do menial work which the slave's tabu will not allow him to undertake. They are trained to War, 'theft and homicide7-and yet one gets glimpses of unexpected sentiment: "An old Mahri who had not some empty-handed stood by watithing me despatch a chameleon. •'Wallah! By God ! ' ho burst mit,"it is treachery. I found' it innocent in a bush and 'it Caine along with mo trusting, and this is what I consent to happen

Or again, a.baby coney died after two nights of captivity and Sa'icl, "a young askari, whose practice it was to come end fondle it, could not bring himself to watch it skinned, but walked away with bowed head—a display of sentiment unusual in these barbarous places."

The temptation to quote is irresistible, but where there is so much that holds the interest and imagination it is probably the only fair Way to illustrate the detailed observation of the' author. He notes, for instance, that when he was a guest at a formal reception : "In this land of true frankincense unexcelled in the world, my host was surpassing himself by using an imported substitute, inferior to my mitsd, but here snore costly."

Nor can :a dialogue between his guide and the author he omitted. (Incidentally, that he could bring these fanatical Arabs to accompany him on such an arduous and dangerous journey .during Itainadhan is sufficient. proof of Mr. Thomas' Personality.). .

" There is one thing I want from you, when we arrive, Sahib,'

said Sahail. What is that I'

But this is the fast of Ramadhan.'

• 'Tobacco is the one thing I cannot do without, Sahib. I fast from everything but tobacco.' • Buti is it hot a ' '‘13y Godlt is, but what shall a man do ?—and it is only this Hamadhars, in no previous year have I drunk tobacco.'

Fern-lutists would doubtless hold that Saha had broken the fast by smoking, so thaethere, was no virtue in the reat of his abstinence. . . . have merey on me,' I heard him mutter as I pushed on