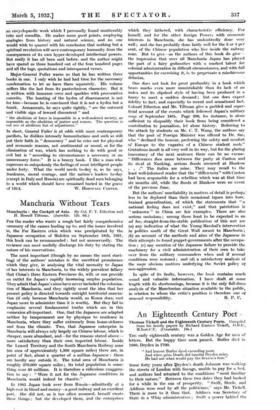 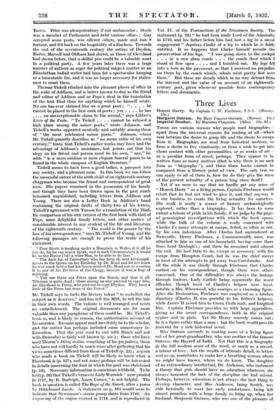 TEE early eighteenth century was a Golden Age for meal of letters. But the happy time soon passed. Butler died in 1380, Dryden in 1700.

"And honest Butler dyed exceeding poor, And when grim Death did tuneful Dryden seize, He had not what would pay the Sexton's fees."

Some forty years after Dryden's death Johnson was walking the streets of Loniton with Savage, unable to pay for a bed, and authors had returned to the conditions "most familiar to their nature." Between these two dates they had basked for a while in the sun of prosperity. "Swift, Steele; and Addison were read by all the politicians," says 'Mr. Tickell. There is more to it than that. Addison was Secretary of State in a Whig administration ; Swift a power behind the

Tories. Prior was plenipotentiary if not ambassador ; Steele was a member of Parliament and held various offices; Gay accepted some posts; was offered others, made and lost a fortune, and fell back on the hospitality of a Duchess. Towards the end of the seventeenth century the satires of Dryden, Butler, Marvell tind Oldham had shown, as those of Cleveland had shown before, that a skilful pen could be a valuable asset to a political party. A few years later there was a large number of authors as eager for political subject matter as an Flissbethan ballad writer had been for a spectacular hanging or a lamentable fire, and it was no longer necessary for states-. men to court them.

Themes Tiekell climbed into the pleasant places of office in the wake of Addison, and is better known to-day as the friend and editor of Addison and as Pope's rival in the translation of the first Iliad than for anything which he himself wrote. No one has ever claimed him as a great poet ; " . . . . he cannot be placed in the first rank of poets ; yet . . . . helms

... an unexceptionable claim to the second," says Cibber's Lives of the Poets. "To Tickell . . . . cannot be refused a high place among the minor poets," wrote Johnson, and Tickell's works appeared modestly and suitably among those of "the most celebrated minor poets." Johnson, whom Mr. Tickell quaintly describes as "no mean critic of his own century," hints that Tickell's earlier works may have had the advantage of Addison's assistance, but points out that his .elegy on his friend and patron must be his own, "nor," he adds "is a more sublime or more elegant funeral poem to be found in the whole compass of English literature."

Tickell seems to have been a good talker, a passport into any society, and a pleasant man. In this book we can follow the successful career of the sixth child of an eighteenth-century clergyman who became the friend and correspondent of great men. His papers remained in the possession of his family and though they have been drawn upon in the past much -remained unpublished, including letters from Addison and Young. There are also a Letter Book in Addison's hand containing the original drafts of thirty-two of his letters, Tickell's agreement with Tonson for a translation of the Iliad, , his comparison of his own version of the first book with that of Pope, some delightful family letters, and other matter of considerable interest to any student of the life and literature of the eighteenth century. "The world is the poorer by the

• loss of his correspondence," says Mr. Tiekell of Young, and•the following passages are enough to Prove the truth of his statement.

' " rhos Steele is laughing under a Mountain in Wales, it is all he can do, for he can scarce speak, and in midi Circumstances it would -be to the Honor (Poi) a wiser Man, to be able to do that." "The Arch Bp. of Canterbury who has been ill, sent his Compli- , merits to the Queen on her Birthday by Dr. Mead and let her know he Was much better but his Grace desired Dr: Mead not to mention it to any of his Brethren of the Clergy, because it was a Day of rejoicing. "You You 808 there are Jokes upon the Bench, and that is all. Tillotson is quite dead ; those among us who pretend to copy him, arc like these in Poesy, who pretend to copy Dryden.- They have a little of the Form but none of the Power.'

Mr. Tiekell says he lacks the literary talent "to embellish the . subject as it deserves," and has left the.MSS. foTtell the tale • in their own words. The volume is well arranged and needs no embellishment. The original documents are far more valUable than any paraphrase of them could be. Mr. Tickell's book is, and is likely to remain, the authoritative account of his ancestor. Its main appeal must inevitably be to the scholar, and the author has perhaps included some Unnecessary in- formation. That the year used to end with March and not with December is fairly well known (p. xis;); those :Mid have iuseilHeterne's Diary realise Something of his Prejudices', thOse ; who have not will hardly be much wiser after gathering thattis -:•views sometimes differed from those of Tickell (p. 22) ; anyone • who reads a book on Tiekell will be likely to know what a Hornbook is (p. 127), and not many perhaps will be interested In details concerning the font in which the Poet was christened .(p. 16). Necessary information is sometimes withheld. -To be told (p. 56) that Tickell's verses to Lady Warwick -" were printed in 1717, by R. Burleigh, Amen Corner," is not helpful.- The book in question is called The Rape of the Smock; after a poem by Hildebrand Jacob. A statement on p.-16.5 would:seem to indicate that Newcomen's steam pump dates friaW1720: An ' engraving of the engine existed in 1718, and is"reproducced 'in Vol. IV. of the Transactions of the Newoomen Society. -The statement (p. 28)-" he had been made Lord of the Admiralty in 1710, and his father before him had lost -a leg in a naval engagement" deprives Clarke of a leg to which he is fairly entitled. It so happens that Clarke himself records the preservation of his legs. "I was going -down to the cockpit . . . in a new glass coach . . . the coach door which I stood at new open . . . . and I tumbled- out. My legs fell into a hole in the pavement, so that I received no prejudice on them by the coach wheels, which went pretty fast over them." But these are details which in no way detract from the interest and the value of an account of an eighteenth- century poet, given whenever possible from contemporary letters and documents.