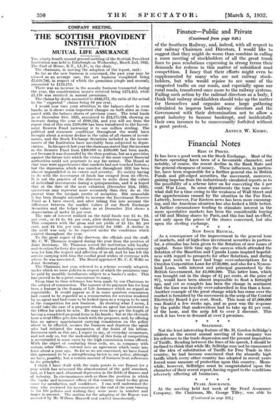 IT has been a good week on the Stock Exchange. Most of the factors operating have been of a favourable character, and notably, of course, the recent decline in the Bank Rate and the general cheapness of money. These influences, in particu- lar, have been responsible for a further general rise in British Funds and gilt-edged securities, the movement, moreover, gaining impetus from the industriously circulated reports as to the possibility of a scheme later on for converting the 5 per cent. War Loan. In some departments the tone was some- what dull for a time owing to the weakness of Wall Street and the apprehensions caused by the situation in the Far East. Latterly, however, Far Eastern news has been more encourag- ing, and the American situation has also looked a little better. A further circumstance tending to stimulate interest in the more speculative markets has been the considerable buying of Oil and Mining shares by Paris, and this has had an effect, not only upon the prices of the shares concerned, but also upon the sterling exchange.