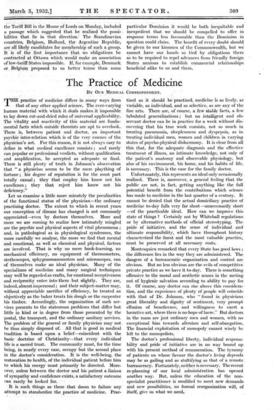 The Practice of Medicine

T'. practice of medicine differs in many ways from

. that of any other applied science. The ever-varying human material with which it deals makes ,it impossible to lay down cut-and-dried rules-of universal applicability. The vitality and reactivity of this material are funda- mental facts which outside theorists are apt to overlook. There is, between patient and doctor, an important psychic inter-relation which is of the very essence of the physician's art. For this reason, it is not always easy to define in what medical excellence consists ; and rarely can popular or professional verdicts, without qualification and amplification, be accepted as adequate or final. There is still plenty of truth in Johnson's observation that "a physician seems to be the mere plaything of fortune ; his degree of reputation is for the most part totally casual ; they that employ him know not his excellence ; they that reject him know not his deficiency."

Let us examine a little more minutely the peculiarities of the functional status of the physician—the ordinary practising doctor. The extent to which in recent years our conception of disease has changed is not commonly appreciated—even by doctors themselves. More and more we are coming to realize how intimately mingled are the psychic and physical aspects of vital phenomena ; and, in pathological as in physiological syndromes, the more carefully we analyse, the more we find that mental and emotional, as well as chemical and physical, factors are involved. That is why no mere book-learning, no mechanical efficiency, no equipment of thermometers, stethoscopes, sphygmomanometers and microscopes, can of themselves make an ideal physician. Many of the specialisms of medicine and many surgical techniques may well be regarded as crafts, for emotional receptiveness and reciprocity enten into them but slightly. They are, indeed, almost impersonal ; and their subject-matter may, without appreciable sacrifice of efficiency, be treated as objectively as the baker treats his dough or the carpenter his timber. Accordingly, the organization of such ser- vices presents to the statesman problems that differ but little in kind or in degree from those presented by the postal, the transport, and the ordinary sanitary services. The problem of the general or family physician may not be thus simply disposed of. All that is good in medical tradition is based upon a belief—coincident with the basic doctrine of Christianity—that every individual life is a sacred trust. The community must, for the time being, in nearly every case, occupy but the second place in the doctor's consideration. It is the well-being, the restoration to health, of the individual patient before him to which his energy must primarily be directed. More- over, unless between the doctor and his patient a liaison of sympathy and confidence exists, a satisfactory outcome can rarely be looked for. • • • It is such things as -these that doom to failure any attempt to standardize the practice of medicine. Prac- tised as it should be practised, medicine is as lively, as variable, as individual, and as selective, as are any of the fine arts. There are, of course, a few stable facts, a few. tabulated generalizations ; but no intelligent and ob- servant doctor can be in practice for a week without dis- covering that his true work consists, not so much in treating pneumonia, sleeplessness and dyspepsia, as in treating individual men, women and children in varying states of psycho-physical disharmony. It is clear from all this that, for the adequate diagnosis and the effective treatment of illness, an intimate knowledge, not only of the patient's anatomy and observable physiology, but also of his environment, his home, and his habits of life, is necessary. This is the case for the family doctor.

Unfortunately, this represents an ideal only occasionally realized. There is, moreover, a general feeling that the public are not, in fact, getting anything like the full- potential benefit from the contributions which science has made to medicine in the last quarter of a century. It cannot be denied that the actual domiciliary practice of medicine to-day falls very far short—unnecessarily short —of the practicable ideal. How can we improve this state of things ? Certainly not by Whitehall regulations or by alternative methods of official stereotyping. The pride of initiative, and the sense of individual and ultimate responsibility, which have throughout history characterized the finest and the most valuable practice, must be preserved at all necessary costs.

Montesquieu remarked that every State has good laws ; the difference lies in the way they are administered. The dangers of a bureaucratic organization and control are obvious. But no less obvious are the evils of competitive private practice as we have it to-day. There is something offensive to the moral and aesthetic senses in the meting out of hygienic salvation according to ability to pay for it Of course, any doctor can rise above this considera- tion, and the experience of plenty of people will coincide with that of Dr. Johnson, who "found in physicians great liberality and dignity of sentiment, very prompt effusion of beneficence, and willingness to exert a lucrative art, where there is no hope of lucre." But doctors in the mass are just ordinary men and women, with no exceptional bias towards altruism and self-abnegation. The financial exploitation of monopoly cannot wisely be left to the monopolists.

The doctor's professional liberty, individual responsi- bility and pride of initiative are in no way bound up with his present method of remuneration. The tyranny of patients on whose- favour the doctor's living depends may be as galling and as stultifying as that of a remote bureaucracy. Fortunately, neither is necessary. The recent re-planning of our local administration has opened another way. But, unless the education of the non- specialist practitioner is modified to meet new demands and new possibilities, no formal reorganization will, of itself, give us what we need,