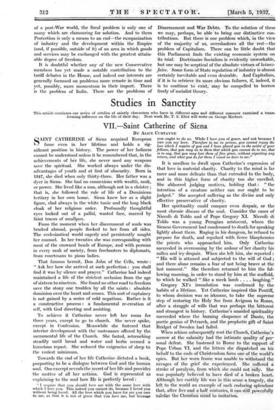 This article continues our series of studies of saintly characters who have in different ages and different manners exercised a trans. forming influence on the life of their day. Next week Mr. T. S. Eliot will write on George Herbert.

From the moment when her discernment of souls was bruited abroad, people flocked to her from all sides. The ecclesiastical world eagerly and persistently sought her counsel. In her twenties she Was corresponding with most of the crowned heads of Europe,' and with persons in every rank of society, from freebooters to diplomats, from courtesans to pious ladies.

That famous hermit, Don John of the Cells, wrote : "Ask her how she arrived at such perfection : you shall find it was by silence and prayer." Catherine had indeed maintained a life Of the strictest seclusion from the age of sixteen to nineteen. She found no other road to freedom save the stony one trodden by all the saints : absolute dominion over the heart and senses. This sort of captaincy is not gained by a series of cold negations. Rather is it a constructive process : a fundamental re-creation of self, with God directing and assisting.

To achieve it 'Catherine never left her room for three years, except to go to church. She 'never spike, except in Confession. Meanwhile she fostered that interior development with the sustenance offered by the sacramental life of the Church. She faded, retrenching steadily until bread and water and herbs seemed a luxurious repast. She reduced the exigencies of sleep to the veriest' minimum. '

Towards the end of her life Catherine dictated n book, purporting to be a dialOgne between God and the human soul. One excerpt reveals the iecret of her life and provides the 'motive of all her actions. -God' is represented as explaining to the soul how He is perfectly loved "I require that you should love me. With the same' love with which I love you. ThiS indeed you cannot do, because I loved you without being loved. All the love whielv you have for me you owe to me. so that it is not of grace that you love me, but because you ought to do so. While I love you of grace, and not because I 0Y713 you my love. Therefore to me in person, you cannot repay the love which I require of you and I have placed you in the midst of your fellows, that you may do to them that which you cannot do to me, that it to say, that you may lope them of free grace without expecting any return, and what you do for them I count as done to me." - It is needless to dwell upon Catherine's expression of that love in material charity. Charity t to the mind is far rarer and more delicate than that extended to the body, and in this .higher form of' charity too . she . excelled: She abhorred judging Motives, holding that .` the intention of a creature neither can nor ought to be judged." She accepted suffering as the divine and only

Her spirituality could conquer even despair, or the most chronic disease of the soul. Consider the cases of Niceolb di Toldo and of Pope Gregory XI. Niccolo di Toldo was, a young Perugian aristocrat, whom the Sienese Government had condemned to death, for speaking lightly about them. Raging in his dungeon, he refused to prepare for death, and repulsed with fierce blasphemies the priests who approached him. Only Catherine succeeded in overcoming by the ardour of her charity his sullen and icy despair. When she left him, she reported : "His will is attuned and subjected to the will of God ; and there alone. remains a fear of not being brave at the last moment." She therefore returned to him the fol- lowing morning, in order to stand by him at the scaffold, to which he walked " like a Meek lamb . . . . laughing."

Gregory XI's . irresolution was . confirmed ,by, the habits of a lifetime. Yet Catherine inspired this Pontiff,

step of restoring the Holy See from Avignon. to. Rome, after- a struggle of Wills that was perhaps the, bitterest and strangest in history. Catherine's unaided Spirituality 'succeeded where the .burning . eloquence Of Dante, the poetic genius of Petrareh, and the prophetic. gift of Saint

Bridget of Sweden had failed. .

When schism subsequently rent the Church, Catherine's sorrow at the calamity had the intimate .quality of per sonal defeat. She 'hastened to Rome to the support of Pope Urban VI,. 'and the letters' she dispatched on his behalf to the ends of Christendom form one of the world's . .

epics. But her worn frame was unable. to withstand the ravages of the grief she experienced. She suffered a stroke of paralysis, from which she could not rally. She was popularly believed to have died of a broken heart. Although her earthly life was 'in this sense a tragedy, she left to the .world an example of such enduring splendour that, after five and a half centuries, it can still. powerfully subdue the Christian Mind to imitation.'