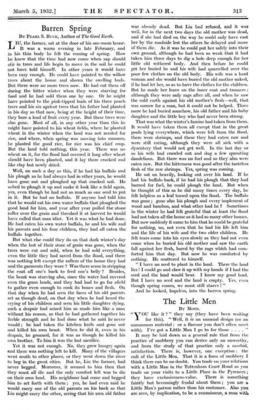 BY PEARL S. Buck, Author of The Good Earth.

the farmer, sat at the door of his one-room house. IA It was a warm evening in late February, and in his thin body he felt the coming of spring. How ha knew that the time had now come when sap should stir in trees and life begin to move in the soil he could not have told himself. In other . years it would have been easy enough. He could have pointed to the willow trees about the house, and shown the swelling buds. But there were no more trees now. Ile had cut them off during the bitter winter when they were starving for food and he had sold them one by one. Or he might have pointed to the pink-tipped buds of his three peach trees and his six apricot trees that his father had planted in his day so that now, being at the height of their time, they bore a load of fruit every year. But these trees were also gone. Most of all, in any other year than this he might have pointed to his wheat fields, where he planted wheat in the winter when the land was not needed for rice, and where, when spring was moving into summer, he planted the good rice, for rice was his chief crop. But the land told nothing, this year. There was no wheat on it, for the flood had covered it long after wheat should have been planted, and it lay there cracked and like clay but newly dried.

Well, on such a day as this, if he had his buffalo and his plough as he had always had in other years, he would have gone out and ploughed up that cracked soil. He ached to plough it up and make it look like a field again, yes, even though he had not so much as one seed to put in it. But he had no buffalo. If anyone had told him that he would eat his own water buffalo that ploughed the good land for him, and year after year pulled the stone roller over the grain and threshed it at harvest he would have called that man idiot. Yet it was what he had done. He had eaten his own water buffalo, he and his wife and his parents and his four children, they had all eaten the buffalo together.

But what else could they do on that dark winter's day when the last of their store of grain was gone, when the trees were cut and sold, when he had sold everything, even the little they had saved from the flood, and there was nothing left except the rafters of the house they had and the garments they wore ? Was there sense in stripping the coat off one's back to feed one's belly ? Besides, the beast was starving also, since the water had covered even the grass lands, and they had had to go far afield to gather even enough to cook its bones and flesh. On that day- when he had seen the faces of his old parents set as though dead, on that day when he had heard the crying of his children and seen his little daughter dying, such a despair had seized him as made him like a man without his reason, so that he had gathered together his feeble strength and he had done what he said he never would ; he had taken the kitchen knife and gone out and killed his own beast. When he did it, even in his despair, he groaned, for it was as though he killed his own brother. To him it was the last sacrifice.

Yet it was not enough. No, they grew hungry again and there was nothing left to kill. Many of the villagers went south to other places, or they went down the river to beg 'in the great cities. But he, Liu the farmer, had never begged. Moreover, it seemed to him then that they must all die and the only comfort left was to die on their own land. His neighbour had come and begged him to set forth with them ; yes, he had even said he would carry one of the old parents on his back so that Liu might carry the other, seeing that his own old father

was already dead. But Liu had refused, and it was 'well, for in the next two days the old mother was dead, and if she had died on the way he could only have cast her by the roadside lest the others be delayed and more of them die. As it was he could put her safely into their own ground, although he had been so weak that it had taken him three days to dig a hole deep enough for her little old withered body. And then before he could get her buried he and his wife had quarrelled over the poor few clothes on the old body. His wife was a hard woman and she would have buried the old mother naked, if he had let her, so as to have the clothes for the children. But he made her leave on the inner coat and trousers ; although they were only rags after all, and when he saw the cold earth against his old mother's flesh—well, that was sorrow for a man, but it could not be helped. Three more he had buried somehow, his old father and his baby daughter and the little boy. who had never been strong.

That was what the winter's famine had taken from them. It would have taken them all except that in the great pools lying everywhere, which were left from the flood, there were shrimps, and these they had eaten raw and were still eating, although they were all sick with a dysentery that would not get well. In the last day or so his wife had crawled out and dug a few sprouting dandelions. But there was no fuel and so they also were eaten raw. But the bitterness was good after the tasteless flesh of the raw shrimps. Yes, spring was coining.

He sat on heavily, looking out over his land. If he had his buffalo back, if he had his plough that they had burned for fuel, he could plough the land. But when he thought of this as he did many times every day, he felt helpless as a leaf tossed upon the flood. The buffalo was gone ; gone also his plough and every implement of wood and bamboo, and what other had he ? Sometimes in the winter he had felt grateful that at least the flood had not taken all the house as it had so many other houses. But now suddenly it came to him that he could be grateful for nothing, no, not even that he had his life left him and the life of his wife and the two older children. He felt tears come into his eyes slowly as they had not even come when he buried his old mother and saw the earth fall against her flesh, bared by the rags which had com- forted him that day. But now he Was comforted by nothing. He muttered to himself.

And he looked, hopeless, into the barren spring.