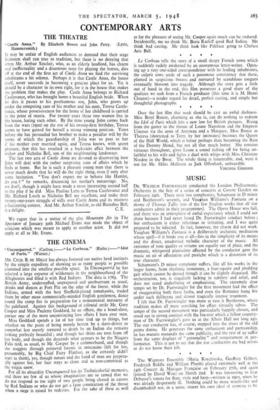 MR. CECIL B. DE MILLE has always fostered our native herd instincts by the simple expedient of showing us as many people as possible crammed into the smallest possible space. In Unconquered he has selected a large expanse of wilderness in the neighbourhood of the Alleghenies and filled it with Red Indians. The date is 1763. The British Army, understaffed, unprepared and unobservant as usual, drinks and dances at Fort Pitt on the edge of the forest, while the Indians, armed with the best Sheffield-plated tomahawks, traded them by other more commercially-minded English gentlemen, dance round the camp fire in preparation for a monumental massacre of the palefaced. Against this background of colonial strife Mr. Gary Cooper and Miss Paulette Goddard, he an officer, she a bond-slave, pursue one of the most unconvincing love affairs I have ever seen.

Miss Goddard spends a lot of her time tied up to things, but whether on the point of being merely beaten by a slave-driver or somewhat less merely tortured to death by an Indian she remains looking perfectly beautiful ; and though her skirts are torn from off her body, and though she descends what appears to be the Niagara Falls tied, as usual, to Mr. Cooper by a cummerbund, and though she staggers through primeval forests in moccasins (left for her, presumably, by Big Chief Fairy Flatfoot, as she certainly didn't start in them), yes, though nature and the hand of man are perpetu- ally against her, her face stays as clean and as non-committal as the virgin snow.

For all its absurdity Unconquered has its Technicolorful moments, and there are few of us whose imaginations are so tamed that we do not respond to the sight of two people being chased in canoes by Red Indians or who do not get a faint constriction of the throat when a siege is raised by redcoats. For the sake of these as well

as for the pleasure of seeing Mr. Cooper again much can be endured. Incidentally, me no think Mr. Boris Karloff good Red Indian. Me think bad casting. Me think look like Paleface going to Chelsea Arts Ball.

* * or Le Corbeau tells the story of a small sleepy French town which is suddenly rudely awakened by an anonymous letter-writer. Open- ing up a very one-sided correspondence with its leading inhabitants, the culprit sows seeds of such a poisonous consistency that these, planted in suspicious breasts and nurtured by scandalous tongues eventually blossom into tragedy. Although the story gets a little out of hand in the end, this film possesses a good share of the qualities we seek from a French producer (this time it is M. Henri Clouzot)—a tender regard for detail, perfect casting, and simple but thoughtful photography.

Over the last film this week should be cast an awful darkness Miss Beryl Baxter, charming as she is, can do nothing to redeem the Idol of Paris which hits a new low for British pictures. Rising from the gutter to the throne of Louee Napoleon and the Empress Ujaynee via the arms of Anntwan and a Marquee, Miss Baxter as Theresa (shortened to Terry by her intimates) becomes the Queen of the Half World, which is better perhaps than becoming the Rain of the Demmy Mond, but not all that much better. She remains virtuous throughout, gives Louee a sound ticking off for being un- faithful to his wife and fights a duel with whips with Miss Christine Norden in the Bwar. The whole thing is lamentable, and, were it not for Mr. Miles Matteson as Jark Offenbark, unbearable.