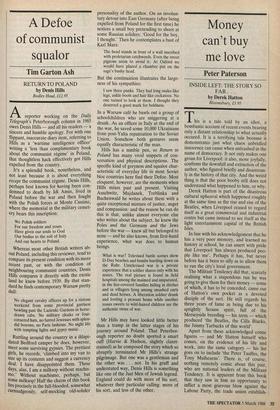 A Defoe of communist squalor

RETURN TO POLAND by Denis Hills

Areporter working on the Daily Telegraph's Peterborough column in 1985 owes Denis Hills — and all his readers — a sincere and humble apology. For with one flippant, inaccurate diary item, referring to Hills as a 'wartime intelligence officer' writing a less than complimentary book about the communist regime' in Poland, that thoughtless hack effectively got Hills expelled from the country. It's a splendid book, nonetheless, and not least because it is about everything except the communist regime. Denis Hills, perhaps best known for having been con- demned to death by Idi Amin, lived in Poland before the war and then fought with the Polish forces at Monte Cassino, where the memorial in the military cemet- ery bears this inscription: We Polish soldiers

For our freedom and yours Have given our souls to God Our bodies to the soil of Italy And our hearts to Poland.

Whereas most other British writers ab- out Poland, including this reviewer, tend to compare its present condition with its more recent past, or with the condition of neighbouring communist countries, Denis Hills compares it directly with the exotic land he knew before 1939. By that stan- dard he finds contemporary Warsaw pretty dull:

No elegant cavalry officers up for a riotous weekend from some provincial gamson bowling past the Lazienki Gardens in horse- drawn cabs. No military cloaks or four- cornered hats, no furred Jewesses with splen- did bosoms, no Paris fashions. No night life with tempting lights and gypsy music.

Rattling around the country in a dilapi- dated Bedford camper he does, however, meet some surviving gypsies. The prettiest girls, he records, 'climbed into my van to size up its contents and suggest a currency deal. I have disappointed them. These days, alas, I am a milksop without machis- mo.' Without machismo, perhaps, but some milksop! Half the charm of this book lies precisely in the full-blooded, somewhat curmudgeonly, self-mocking old-solider personality of the author. On an involun- tary detour into East Germany (after being expelled from Poland for the first time) he notices a small boy pretending to shoot at some Russian soliders: 'Good for the boy, I thought.' Then he contemplates a bust of Karl Marx:

The head stands in front of a wall inscribed with proletarian catchwords. Even the street pigeons seem to avoid it. At Oxford we

But the continuation illustrates the large ness of his sympathies:

I saw three punks. They had long snake-like legs, ankle boots and hair like cockatoos. No one turned to look at them. I thought they deserved a good mark for boldness.

In a Warsaw café he bawls out a group of schoolchildren who are sniggering at a drunk. As an officer in Italy at the end of the war, he saved some 10,000 Ukrainians from post-Yalta repatriation to the Soviet Union. Somehow both gestures seem equally characteristic of the man.

Hills has a nimble pen, so Return to Poland has many vivid snippets of con- versation and physical descriptions. The specific kind of greyness and squalor char- acteristic of everyday life in most Soviet bloc countries here find their Defoe. Most eloquent, however, are the moments when Hills mixes past and present. Visiting Auschwitz, Majdanek, Treblinka and Buchenwald he writes about them with a quite exceptional mixture of justice, anger and compassion: and the reason he can do this is that, unlike almost everyone else who writes about the subject, be knew the Poles and the Germans and the Jews before the war — knew all but belonged to none — and he also knows, from first-hand experience, what war does to human beings.

What is war? Televised battle scenes show D-Day beaches and bombs hurtling down on the Ruhr. Untelevised war is a private experience that a soldier shares only with his mates. The real picture is found in field hospitals among the maimed and amputated, in the lice-covered families hiding in ditches and in villagers lying among smashed carts and dead horses. A liberation soldier drunk and looting a peasant home while another tosses sweets to wild-haired children are the authentic twins of war.

Mr Hills may have looked little better than a tramp in the latter stages of his journey around Poland. That Peterbor- ough reporter no doubt sported a smart cuff (Harvie & Hudson, slightly claret- stained) as he composed the story which so abruptly terminated Mr Hills's strange pilgrimage. But one was a gentleman and the other was . . . not. In his gruff and understated way, Denis Hills is something like one of the Just Men of Jewish legend. England could do with more of his sort, whatever their particular calling: more of his sort, and less of the other.