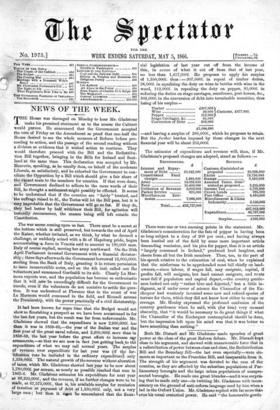 The war seems coming upon us fast. There must be

a secret at the bottom which is still preserved, but towards the end of April the Kaiser, whether irritated, as we think, by what he deemed a challenge, or suddenly seized with a fit of Hapsburg pride, began accumulating a force in Venetia said to amount to 180,000 men. Italy of course replied, moving her army northward. On the 30th April Parliament invested Government with a financial dictator- ship ; three days afterwards the Government borrowed 10,000,000/. sterling from the Bank of Italy, granting it in return permission to issue inconvertible notes, and on the 4th inst. called out the volunteers and summoned Garibaldi to its side. Clearly La Mar- mora expects war, and the population has become so enthusiastic that it will now be exceedingly difficult for the Government to recede, even if the volunteers do not contrive to settle the ques- tion. It was understood at Florence that in the event of war La Mamoru would command in the field, and Ricasoli assume the Premiership, with the power practically of a civil dictatorship.