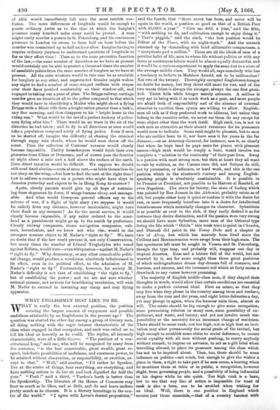 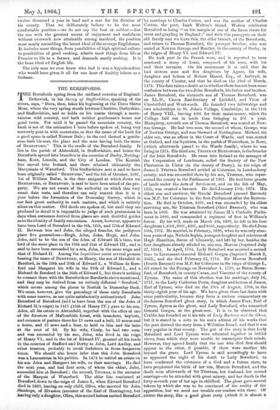 WHAT is really the best external position, the position securing the largest amount of enjoyment and possible usefulness attainable by an Englishman in the present age ? The question was started the other day among a group of literary men, all doing nothing with the eager interest characteristic of the class when engaged in that occupation, and each was called on to tell his ideal as honestly as he could. The replies, all intensely characteristic, were all a little bizarre. "The position of a con- stitutional king," said one, who will be recognized by many from the sentence, " is the best conceivable, great wealth, great re- spect, indefinite possibilities of usefulness, and enormous power, to be attained without observation, or responsibility, or exertion, ex- cept in chat." " Well," said another, " I'd rather be Speaker, live at the centre of things, hear everything, see everything, and have nothing serious to do but sit and look dignified for half the year." " Pooh !" said a third, " Varden's berth is better than the Speakerehip. The librarian of the House of Commons may hear as much as he likes, and as little, and do and leave undone pretty much as he chooses. It is a literary hermitage in the cen- tre of the world." " I agree with Lever's eternal proposition," said the fourth, that " there never has been, and never will be again in the world, a position so good as that of a British Peer with 40,000/. a year." " Give me 4001. a year," said the fifth, " with nothing to do, and cultivation enough to enjoy doing it." " That's piggish," said the sixth, " the best position would be. Editor of the Times, with no night-work." And the seventh summed up by demanding with brief alliterative compactness, a " marquisate and a million." These are all the ideals of men of a peculiar habit of life, men to whom life without politics or with any fierce or continuous labour would be almost equally distasteful, and it would be a curious experiment to apply the same test to a score of the average middle class. They would all, says somebody who has a tendency to believe in Matthew Arnold, ask to be millionaires? Not two of the twenty. Thoroughly occupied Englishmen hunger no doubt for money, but they thirst still more for rest, and of the two wants thirst is always the stronger, always the one first grati- fied. Thirst kills while hunger merely exhausts. A million is very apt to bring with it as much work as a post, and more people are afraid both of responsibility and of the absence of external stimulus to exertion than cynics are willing to allow. English- men all talk as if they preferred work to idleness, but unless they belong to the creative order, we never see them do any except for some object other than the work itself. High rank, too, is not to such men so attractive es their absurd reverence for its possessors would seem to indicate. Some rank might be pleasant, but to men who are neither born to it, nor have seen it for years in the far distance,—as an Attorney-General, for instance, sees it, so clearly that when he buys land he pays more for places with pleasant names—high rank would be simply a bore, would involve too complete a " solution in the continuity " of their past lives. Sway is a passion with most strong men, but then at heart they all want to rule by volition, as the Caesars once did, and Sultans do still, not by persuasion, or influence, or hard work, and this is the one position which in the nineteenth century and among English- speaking people is absolutely unattainable. It is possible to be Premier or President, not possible to be Harem al Raschid, or even Napoleon. The crave for luxury, the state of feeling which was painted by Ben Jenson in the Alchemist, probably exists as of old, but people either keep it quiet or confuse it with the desire for rest, or more frequently interfuse into it a desire for intellectual luxuriousness which materially changes its character. Sybaritism is as possible as ever to the rich, if they really- desired it as for instance they desire distinction, and if the passion were very strong we should have more Sybarites, more men of the Oriental type living the life which " Oujda " this week tries to paint in Chandos, and Disraeli did paint in the Young Duke and a chapter or two of Alroy, but which has scarcely been lived since the Crillons and Montmorencies were swept from their high seats. The last specimens left must be sought in Vienna and St. Petersburg, though the type may, and probably will, reappear one day in tropical America. Ease and a leisure full of the worlds but not worried by it, are far more sought than those great positions of which undergraduates dream day-dreams full of romance, and heroism, and success, and the incessant toil which at forty seems a drawback to any career however promising.

The majority of English middle-class men, if they shaped their thoughts in words, would allow that certain conditions are essential to make a perfect external ideal. First an estate, so that they may live when they please in the country among trees and verdure, away from the roar and the press, and eight letter deliveries a day, yet may plunge in again, when the humour suits them, almost at will. The estate should be big enough to give some occupation, some patronizing relation to many men, some possibility of ex- periment, and waste, and luxury, and yet not involve much res- ponsibility or the necessity for an incessant change of residence. There should be some rank, not too high, not so high that an invi- tation may alter permanently the social grade of the invited, but high enough to establish some claim to social deference, to ensure social equality with all men without pushing, to marry anybody without remark, to impose on servants, to act as relent label when travelling abroad, to place its possessor among the class which has not to be inquired about. Then, too, there should be some influence on politics—not much, but enough to give the wisher a place in them, a right to take part if he sees cause, a hearing when he mentions them at table or in public, a recognition, however slight, from governing people, and a possibility of being influential in his degree while he sits quiet. Too high rank is a bore, but to see that any line of action is impossible for want of rack is also a bore, one to be avoided when wishing for an ideal. Well, there is one position in England which secures just those essentials,--that of a country baronet with

twelve thousand a year in land and a seat for his division of his county. That we deliberately believe to be the most comfortable position —we do not say the best or noblest—but the one with the greatest means of enjoyment and usefulness Without overwork now attainable among mankind, the position most nearly resembling the latent ideal of the average Englishman. It includes most things, from possibilities of high spiritual culture to possibilities of good cooking, admits most things from life as Premier to life as a farmer, and demands nearly nothing. It is the beau ideal o f English life.

The only man we ever knew who had it was a hypochondriac -who would have given it all for one hour of healthy labour as a hodman.