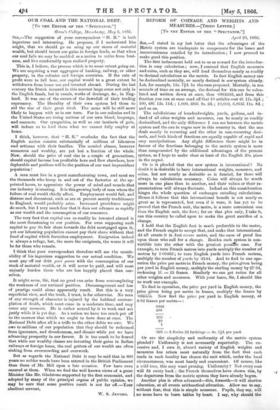 OUR COAL AND THE NATIONAL DEBT.

SIR,—The suggestion of your correspondent " H. R." is both ingenious and interesting. He proposes, if I understand him aright, that we should go on using up our stores of material wealth, but should invest our gains in foreign lands, so that when our coal fails we may be enabled as a nation to retire from busi- ness, and live comfortably upon realized property.

This is, I believe, the process which is to some extent going on.

We are acquiring a vast aggregate of banking, railway, or other property, in the colonies and foreign countries. If the rate of profit were to fall here, our capital would to a great extent be withdrawn from home use and invested abroad. During the last century the Dutch invested in this manner large sums not only in the English funds, but in canals, works of drainage, &c., in Eng- land. It was one of the causes of the downfall of their trading supremacy. The liberality of their own system led them to aid the rise of their great rival. The same will be still more likely to happen with us in our turn. For in our colonies and in the United States are rising nations of our own blood, language, and manners. Our sympathies, as well as our instincts of gain, will induce us to lend them what we cannot fully employ at home.

I think, however, that " H. R." overlooks the fact that the English nation consists substantially of millions of labourers and artizans with their families. The monied classes, however numerous and wealthy, are yet but a fraction of the whole. Now, should the price of coal rise in a couple of generations, should capital become less profitable here and flow elsewhere, how deplorable and perilous will be the position of our vast improvident population !

A man must live in a great manufacturing town, and must see the thousands who troop in and out of the factories at the ap- pointed hours, to appreciate the power of mind and muscle that our industry is-creating. It is this growing body of men whom the failure of coal would chiefly affect. Employment would fail, and distress and discontent, such as are at present merely traditionary in England, would probably arise. Increased providence might do much, but I very much fear that it does not advance as rapidly as our wealth and the consumption of our resources.

The very fact that capital can so readily be invested abroad is the most threatening to our position. For even supposing such capital to pay its fair share towards the debt mortgaged upon it, yet our labouring population cannot pay their share without that fund of capital which furnishes employment. Emigration indeed is always a refuge, but, the more the emigrants, the worse it will be for those who remain.

I think that your correspondent therefore will see the unsuit- ability of his ingenious suggestion to our actual condition. We must pay off our debt pari passe with the consumption of our stock of material wealth, or it will never be paid, and will most unjustly burden those who are less happily placed than our- selves.

It might seem, Sir, that no good can arise from contemplating the weakness of our national position. Discouragement and loss of prestige could alone apparently result. But this is• a very superficial view, and the truth, I trust, is far otherwise. No man of any strength of character is injured by the habitual contem- plation of death, which must come in a moderate time, and may come any moment. He is rather neryed by it to work and act justly while it is yet day. As a nation we have too much put off to the morrow that which we ought to have done at once. The National Debt after all is a trifle to the other debts we owe. We owe to millions of our population that they should be redeemed from ignorance, and drunkenness, and disease while yet we have advancing prosperity in our favour. It is too much to be feared that while our wealthy classes are investing their gains in Indian railways or foreign loans, the real getters of our wealth are often sinking from overcrowding and overwork.

But as regards the National Debt it may be said that in 800 years no nobler words have been uttered in the British Parliament than those of Mr. Mill upon a late occasion. Few have even sneered at them. When we find the well known views of a great Minister like Mr. Gladstone supported by the first economist, and adopted by many of the .principal organs of public opinion, we may be sure that some positive result is not far off.—Your obedient servant,