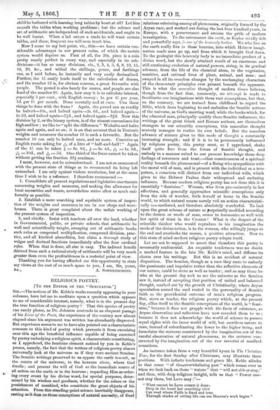 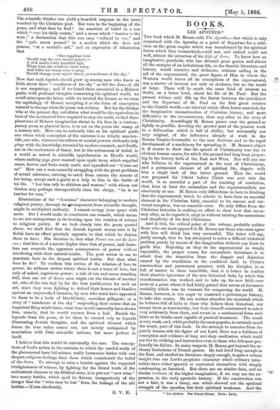 ITo THE EDITOR OF THE " SPECTATOR."]

SIR,—The notices of Mr. Keble's works recently appearing in your columns, have led me to meditate upon a question which appears to me of considerable interest, namely, what is in the present day the true function of religious poetry? That this species of poetry can rarely please, as Dr. Johnson contends in an eloquent passage of his Lives of the Poets, the experience of the century now almost elapsed since his argument was written has abundantly disproved. But experience seemsto me to have also pointed out a characteristic common to this kind of poetry which prevents it from exercising over this age the beneficial influence capable of being exercised by poetry embodying a religious spirit, a characteristic constituting, as I apprehend, the feminine element noticed by you in Keble's poems, namely, the fact that the writers of religious poetry almost universally look at the universe as if they were ancient Semites. The Semitic writings preserved to us oppose the earth beneath, as the centre of the universe, to the heavens above, where God dwells ; and present the will of God as the immediate source of all action on the earth or in the heavens ; regarding Him as order- ing every event by his divine word, for special purposes, deter- mined by his wisdom and goodness, whether for the solace or the punishment of mankind, who constitute the great objects of his attention. From this standing-point science inevitably disappears, resting as it does on those conceptions of natural necessity, of fixed relations subsisting among all phenomena, originally formed by the Aryan race, and worked out during the last four hundred years, in Europe, with a perseverance and success the pride of modern investigation. To the astronomer the earth, as Kepler vividly felt and powerfully says, iv one of the heavenly bodies. We who live on the earth really live in those heavens, into which Hebrew imagi- nation made man go up, and from which it brought God down. To the geologist this heavenly body is no immediate product of a divine word, but the slowly attained result of an enormous and still continuing evolution of natural powers, rising, in its gradual advance, from the life of the chemical atom, to the vegetative, sensitive, and rational lives of plant, animal, and man ; and swayed in all its ceaseless changes by the unchanging characters of the elementary principles ever present beneath the apparent.

This is what the masculine thought of modern times believes, though from the .fact that, commonly, no attempt is made to familiarize our imaginations with these vast conceptions, but that,

on the contrary, we are trained from childhood to regard the Bible, which from beginning to end embodies the Semitic notions of the universe, as God's unerring word, while the books which, for the educated man, principally qualify these Semitic influences, the writings of the great Greek and Roman authors, are themselves strangers to our scientific conceptions, this masculine thought scarcely manages to realize its own beliefs. But the ceaseless advance of science gives to this mode of thought a constantly increasing strength ; and if it is to be permanently influenced by religions poetry, this poetry must, as I apprehend, shake itself quite free from the forms of Semitic thought, and embody in a manner suited to our present knowledge those deep feelings of reverence and trust,—that consciousness of a spiritual reality beneath the phenomenal—of a Being who sympathizes with the moral will of man, and is present with the individual as a true person, a conscious will distinct from our individual wills, which gives to the Hebrew Psalms their widespread and enduring influence. Because modern religious poetry has not done this it is essentially "feminine." Woman, who lives pre-eminently in her affections, and generally approaches scientific conceptions only from the side of wonder, finds herself at home in the Semitic world, to which natural means merely veil an action characteristi- cally non-mediated, and therefore absolutely wonderful. To look upon the great scheme of nature as perpetually modified according to the desires or needs of man, seems to harmonize so well with her spirit of trust in the Creator I What is the despair of the scientific thinker who would reproduce in his imagination the mode of the divine action, is to the woman, who willingly jumps to the end and overlooks the means, a positive attraction. Now to this state of mind modern religious poetry adapts itself.

Let me not be supposed to assert that therefore this poetry is necessarily sentimental. An exquisite tenderness was no doubt a marked feature in the late Mr. Keble's mind, and diffuses its charm over his writings. But this is an accident of natural disposition. The Semites, though as a race they seem to embody the passionate and impulsive rather than the reflective elements of our nature, could be stern as well as tender ; and so may those be who at the present day seek to see the universe as the Semites saw it, instead of accepting that position of united and balanced thought, marked out by the growth of Christianity, where Aryan speculation nursed the seed rooted in the personality of Semitic faith as the providential outcome of man's religious progress. But, stern or tender, the religious poetry which, at the present day, allies itself to the Semitic conceptions of the world, is " femi- nine," because it does not grapple with the facts of existence, as Aryan observation and reflection have now revealed them to us ; because it does not acknowledge the world of science to possess equal rights with the inner world of will, but sacrifices nature to man, instead of subordinating the lower to the higher being, and immolates the universe constructed by the imagination out of the careful observation of natural phenomena, to the universe con- structed by the imagination out of the raw material of unsif tad sensations.

An instance taken from a very beautiful hymn in The Christian Year, for the first Sunday after Christmas, may illustrate these positions. With infinite tenderness and grace Mr. Keble alludes to that sense " of the.overwhelming past" which comes over us when we look back on those " waters " that " will not ebb or stay," and then, with deep religious insight, tells us that " Power can- not stay them, but Love may :"—

" What cannot be Love counts it done:

Deep in the heart her searching view Can read where Faith is fixed and true, Through shades of setting life can see Heaven's work begun "

The scientific thinker can yield a heartfelt response to the notes touched by the Christian poet. But turn to the beginning of the poem, and what does he find ? An assertion of belief in a sun which " runs his daily course," and a moon which " hurries to the west ;" a declaration that this sun once "refused to run," and the " pale moon paused" in a motion which she does not possess, "at a mortal's call," and an expression of admiration that

" One suppliant tear Should stay the owr moving sphere,—

A sick man's lowly breathed sigh, When from the world he turns away, And hides his weary oyes to pray, Should change your mystic dance, ye wanderers of the sky."

Now that such legends should grow up among men who knew as little about these " wanderers of the sky" as did the Jews of old is not surprising ; and if we found them associated in a Hebrew psalm with profound thoughts concerning the spiritual world, we could seize upon the latter, while we treated the former as we treat the mythology of Homer, accepting it as the form of conception natural to the age when the poem was written. But for the thinker who at the present day, calculates what would be the equivalent in heat of the mechanical force required to stop the earth, to find these phantoms of Hebrew imagination thrust in his face in a contem- porary poem as physical facts, is to set on the poem the stamp of a nursery tale. How can he seriously take as his spiritual guide one whose whole conception of the universe is so utterly unscien- tific, one who, whatever his culture or mental powers, obviously only plays with the knowledge revealed by modern research, and dwells, not in the exuberance of fancy, but in the seriousness of belief, in a world as unreal to scientific apprehension as Hood's world, where sucking pigs grew roasted upon apple trees, which supplied sauce, knives and forks ready made, and squeaked out " Come eat us!" How can a man earnestly struggling with the great problems of actual existence, striving to catch from nature the secrets of her being, accept such a guide as a help to him in the battle of his life. " Let him talk to children and women," with whom our thinker may perhaps disrespectfully class the clergy, " he is no teacher for men."

Illustrations of the "feminine" character belonging to modern religious poetry, through its estrangement from scientific thought, might be multiplied endlessly. I cannot occupy your space with more. But I would make in conclusion one remark, which seems to me not unimportant in its bearing upon the relation of science to religious poetry. If we look closely into the poem quoted above, we shall find that the Jewish legends woven into it by Keble have an effect precisely opposite to that which he desires them to have. His doctrine is, that what Power can not do Love can ; that love is of a nature higher than that of power, and there- fore can overrule the apparent consequences of power without interfering with their natural results. The poet seems to me to penetrate here to the deepest spiritual truths. But then what does he do? To confirm this notion of the relation of love to power, he adduces stories where there is not a trace of love, but only of naked, capricious power ; a tale of sun and moon standing still, that one set of fierce men might cut the throats of another set, who of the two had by far the best justification for such an act, since they were fighting to defend their homes and families against an unprovoked invasion, by men who must have appeared to them to be a body of bloodthirsty, merciless pillagers ; or a story of " wanderers of the sky " suspending their course that an impatient King might learn, what time would assuredly have shown him, namely, that he would recover from a boil. Banish the legends from the poem, or let them be treated only as legends illustrating Jewish thoughts, and the spiritual element which forms its true value comes out, not merely unimpaired by association with false scientific notions, but more perfect in itself.

I believe that this would be universally the case. The concep- tions of God's action in the universe to which the careful study of the phenomenal have led science, really harmonize better with our deepest religious feelings than those which constituted the belief of the Jews. To attempt to raise a barrier against the supposed irreligiousness of science, by fighting for the literal truth of the antinatural element in the Biblical story, is to put our " new wine " into musty bottles, which spoil its flavour, irrespectively of the danger that the "wine may be lost" from the leakage of the old