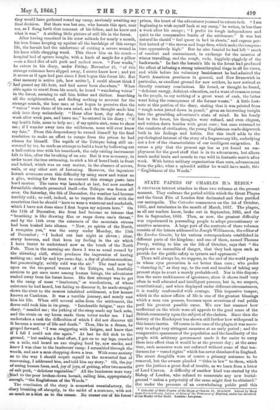 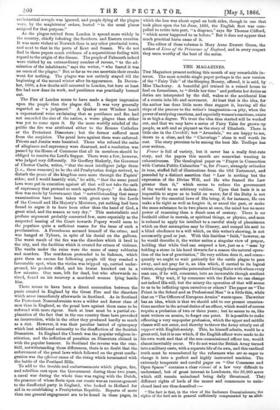 A PECULIAR interest attaches to these two volumes at the present moment. They embrace the period within which the Great Plague and the Great Fire of London first decimated and then purified our metropolis. The Calendar commences on the 1st of October, 1665, and terminates in the month of March, 1667. The plague, as all our readers know, broke out in September, 1665, and the fire in September, 1666. Then, as now, the greatest difficulty was experienced in persuading people to adopt precautionary or sanative measures. A large part of the contents of these volumes consists of the letters addressed to Joseph Williamson, the editor of the London Gazette, by his various correspondents established in different parts of the kingdom ; and one of them, named Thomas Povey, writing to him on the 5th of October, says that " the people are so insensible of danger, that they look upon such as provide for the public safety as tyrants and oppressors."

There will always be, we suppose, to the end of the world people in whose eyes prevention is not better than cure ; who prefer " chancing it," as they say, to the cost and trouble of taking any present steps to avert a merely probable evil. Nor is this disposi- tion the mere recklessness of ignorance, since it shows itself very often in well educated and intelligent persons, but is, we suspect, constitutional ; and when displayed under different circumstances, it is readily confounded with courage. This impassive temper, which in the minor affairs of life is one of the greatest blessings which a man can possess, becomes upon occasions of real public peril his greatest possible curse. We saw last summer 'how ineffectual on the whole were all appeals to the good sense of the British community upon the subject of the cholera. Since then the history of the Rinderpest has shown still further how widespread is this innate inertia. Of course in the case of the plague it was neces- sary to adopt very stringent measures at an early period ; and the comparative sparseness of the population and the familiarity of the people with arbitrary government made it far easier to carry them into effect than it would be at the present day ; at the same time, such measures were not enforced without some of that ten- derness for " vested rights" which has never slumbered in England. The street dunghills were of course a primary nuisance to be removed, but the owners pleaded " titles in law" to them, which gave the justices a great deal of trouble, as we learn from a letter of Lord Craven. A difficulty of another kind was started by the Bishop of London, w,ho refused to consecrate any new burial- ground " unless a perpetuity of the same might first be obtained." But under the pressure of an overwhelming public peril this • Calendar of State Papers of the Reign of Charles 14 1665-1604. Edited by Mary Anne Everett Gheeu, Author of hives of the Prrneesses of Znyland, under the dlreation of the Muter of the Rolle. London; Longulau.

ecclesiastical scruple was ignored, and people dying of the plague were; by the magistrates' orders, buried " in the usual places assigned for that purpose."

As the plague retired from London it spread more widely in the country, chiefly infesting the Southern and Eastern counties. It was more violent at Norwich than in any other provincial town, and next to that in the ports of Kent and Sussex. We do not find in these papers much evidence of a superstitious feeling with regard to the origin of the disease. The people of Falmouth indeed were visited by an extraordinary number of ravens, " to the ad- miration of the inhabitants," says the writer, " who feared it was an omen of the plague." But as far as we can ascertain their croaks went for nothing. The plague was not entirely stayed till the beginning of the second winter after its appearance. In Decem- ber, 1666, a few deaths still occurred in London, but here at least fire had now done its work, and pestilence was practically burned out.

The Fire of London seems to have made a deeper impression upon the people than the plague did. It was very generally regarded as " a judgment." A Quaker near Windsor heard a supernatural voice exclaiming that as pestilence and fire had not amended the sins of the nation, a worse plague than either was yet to come upon it. By the more worldly minded of the public the fire was attributed either to the Roman Catholics or the Protestant Dissenters ; but the former suffered most from the suspicion. The penal laws against them were enforced. Priests and Jesuits were banished. Those who refused the oaths of allegiance and supremacy were disarmed, and a resolution was passed by the House of Commons that all its members should be obliged to receive the Lord's Supper. There were a few, however, who judged very differently. Sir Geoffery Shakerly, the Governor of Chester Castle, writes, " that the most intelligent judge them [i. e., these rumours] to be the old Presbyterian design revived, to disturb the peace of the kingdom once more through the Papists' sides ; and I would heartily wish," he adds, "that the same penal laws were put in execution against all that will not take the oath of supremacy that pretend so much against Popery." A declara- tion was made by Government that " notwithstanding that many examinations have been taken with great care by the Lords of the Council and His Majesty's Ministers, yet nothing had been found to argue it to have been other than the hand of God, a great wind, and the season so very dry." This materialistic and profane argument probably converted few, more especially as the suspected leaning of the Court towards Popery would seem to the populace quite a sufficient reason for the issue of such a proclamation. A Frenchman accused himself of the crime, and was hanged at Tyburn, in spite of his denial on the gallows. The worst result of the fire was the disorders which it bred in the city, and the facilities which it created for crimes of violence. The vaults under the ruins were the scene of many robberies and murders. The murderers pretended to be linkmen, which gave them an excuse for following people till they reached a favourable spot, when the victim was tripped up, carried under- ground, his pockets rifled, and his brains knocked out in a few minutes. One man, left for dead, but who afterwards re- vived, found on his recovery a murdered woman lying beside him.

There seems to have been a direct connection between the panic created in England by the Great Fire and the disorders which arose immediately afterwards in Scotland. As in Scotland the Protestant Nonconformists were a wilder and fiercer class of men than in England, so the penal laws against them came to be enforced with more rigour. Such at least must be a partial ex- planation of the fact that in the one country these laws provoked an insurrection, while in the other they produced hardly so much as a riot. However, it was their peculiar hatred of episcopacy which lent additional animosity to the disaffection of the Scottish Dissenters. In England the Church was the popular religious in- stitution, and the infliction of penalties on Dissenters chimed in with the popular humour. In Scotland the reverse was the case. Still, notwithstanding these differences, there is no doubt that the enforcement of the penal laws which followed on the great confla- gration was the efficient cause of the rising which terminated with the battle of the Pentland Hills.

To add to the trouble and embarrassments which plague, fire, and rebellion cast upon the Government during these two years, a naval war during the whole time was raging with the Dutch, the presence of whose fleets upon our coasts was an encouragement to the disaffected party in England, who looked to Holland for aid in re-establishing a Presbyterian Republic. Reports of more than one general engagement are to be found in these pages, in

which the loss was about equal on both sides, though in one that took place upon the 1st June, 1666, the English fleet was com- pelled to retire into port, " a disgrace," says Sir Thomas Clifford, " which never happened to us before." But it does not appear that much practical harm came of it.

The editor of these volumes is Mary Anne Everett Green, the author of Lives of the Princesses of England, and in every respect they seem worthy of the best of the series.