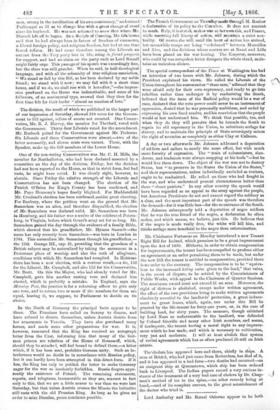 Thecholera has appeared here and there, chiefly in ships. A.

man at Bristol, who had just come from Rotterdam, has died of it, and it has appeared iu a bad form—two deaths had occurred—on an emigrant ship at Queenstown, which ship has been ordered back to Liverpool. The Indian papers record a very curious in- stance of the treatment of a very bad case of cholera by Dr. Chap- man's method of ice to the spine,—no other remedy being at hand,—and of its complete success, to the great astonishment of the doctor who tried it.